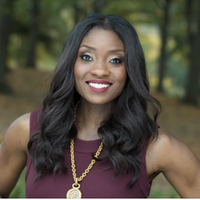 Lola Ogunnaike For more than a decade, Lola Ogunnaike has traveled the globe as a feature writer and television correspondent, covering key events in entertainment, popular culture and politics for the New York Times, CNN, NBC, MSNBC, BET, MTV and Al Jazeera. In that time, Lola has interviewed a wide array of notable figures, from First Lady Michelle Obama and Jane Fonda to George Clooney, Kanye West, Jennifer Lopez, Kevin Costner, Oprah Winfrey and Chinua Achebe. Lola currently moderates an interview series at the Wing, the world’s leading women-focused, co-working space collective and she’s an anchor at People TV, where she hosts breaking news specials, red carpet coverage and the popular series Couch Surfing, a weekly nostalgia trip that features actors sharing exclusive recollections from their storied careers. When she’s not “surfing,” Lola can be found discussing the intersection of pop culture and politics on MSNBC and CNN. Prior to leaping into the world of television, Lola worked as an Arts & Leisure reporter for the NewYork Times and prior to joining the New York Times Lola was a features reporter at the New York Daily News. Her articles have appeared in Rolling Stone Magazine, New York Magazine, Elle, Harper’s Bazaar, Food & Wine, In Style, USA Today, Essence and Vibe. Lola currently resides in Manhattan with her husband and toddler son.

The 21-year-old actress, activist, and Harvard senior is attacking her future—and giving us hope for it.

The award-winning actress, CEO, and daughter of a legend lives her life boldly, no ‘ish’ about it.

By Lola Ogunnaike
The State of Gabrielle Union

“They say silence is violence, and I refuse to be complicit in my silence.”

By Lola Ogunnaike
Megan Thee Stallion Is Just Warming Up

With a new album and buzzy ballroom-competition show, the hot girl evangelist promises this summer will be a scorcher.