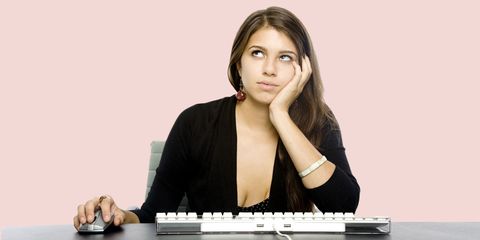 You know that annoying coworker who always rolls their eyes or cracks wise on the job? Don't be surprised if he gets promoted over you. A new study published in the journal Organizational Behavior and Human Decision Processes finds that sarcasm in the workplace can actually make you a more creative thinker.

Researchers at Harvard, Columbia, and the European business school INSEAD manipulated sarcasm in a lab by having participants simulate conversations. In one study, the subjects had to say something sarcastic or sincere, hear a comment that was sarcastic or sincere, or have a neutral conversation. In a second, participants had to remember a time when they said or heard something sarcastic, sincere, or neutral, and in a third study, they had to imagine a sarcastic, sincere, or neutral punchline to a joke. Then they all completed creativity tasks, and the people in the sarcastic conditions all performed better.

According to the researchers, firing off a sarcastic remark can spark creativity because you have to think abstractly, figuring out the distance between the literal and figurative meaning of what you're saying. And the same goes for receiving sarcasm, but only if you're in a trusting relationship with the person you're talking to. Otherwise, that sarcasm can create conflict, since it's always so hard to figure out tone when you don't know a person well.

And if all else fails, there's always the Sarcasm Detector.