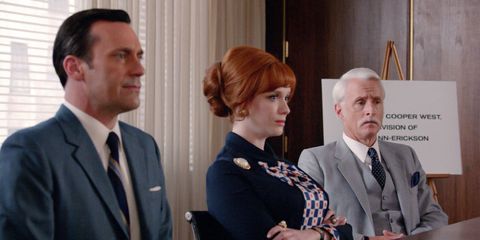 Women who work in male-dominated jobs deserve a whole lot of respect. Not only are they breaking barriers in the workplace, but they're also doing so at the expense of their actual health. A new study finds that women who work with mostly men suffer negative effects in their brain chemistry.

Researchers at Indiana University focused on "occupational sex tokenism," fields in which less than 15% of the workforce is female. Some of their examples included construction supervisors, engineers, painters, and groundskeepers.

The study, which was presented at a meeting of the American Sociological Association, focused on the stress hormone cortisol, which normally fluctuates throughout the day. The researcher used data from another study, in which participants gave samples of cortisol when they woke up, 30 minutes after waking up, while having lunch, and before bed.

They found that women who are considered "tokens" at work have less healthy patterns of cortisol throughout the day. That's controlled for individual characteristics like smoking, sleep patterns, marital status, kids, and medical conditions.

Being the "token woman" can create a negative workplace environment, one in which you're socially isolated, people doubt you can keep up, and sometimes you're even sexually harassed. All that stress leads to a cortisol imbalance in your brain, which can make you vulnerable to disease. So if you work with mostly dudes, self-care isn't just important for your soul—it's crucial for your brain, too.