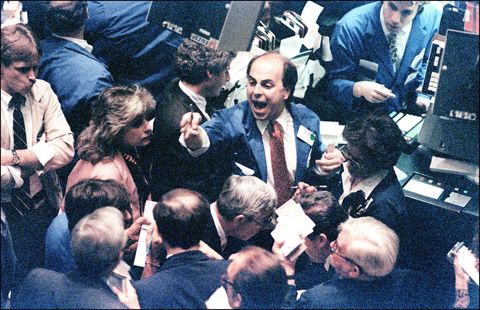 Maureen Sherry never planned on a career in finance but stumbled into the field as a recent college graduate in the '90s. While she found her work at Bear Stearns rewarding, her career also gave her a front-row seat to some pretty toxic male behavior. Now, she's written Opening Belle, a novel that draws on her own professional experiences as it tells the story of a managing director at a major New York City trading desk. Cosmopolitan.com spoke with Sherry about what brought her to Wall Street, the sexism she witnessed there, and what ultimately drew her to fiction.

What was your first indicator that there was something unusual or toxic about Wall Street culture? In the early '90s, my generation wasn't as tuned in to things like harassment. It certainly wasn't something we talked about in college. It starts off so subtly. There were things that would embarrass me, but the word "harassment" wasn't in our vocabulary then. What really opened my eyes were things that were happening not to me, but to the women around me. As I became more senior, I was involved with the hiring of other women, and then [I was] seeing these really bright women leave for the same kind of treatment I was getting. I was much more bothered by it at that point, but rather than leave, I wanted to see if there were ways to improve the culture. Many of the women I worked with noticed it—from bankers to research analysts to saleswomen—and we were all frustrated. Some women at other firms had started to try to address the problem in a litigious way. But we really wanted to [start a dialogue] among ourselves to see if there were ways to bring about real change, without being in the newspaper and filing lawsuits and, frankly, ending our careers.

That sounds similar to the "Glass Ceiling Club" that Belle and her female coworkers form in the novel, to talk about the sexism they're encountering at work. Exactly. I'll tell you how the real Glass Ceiling Club started, after I'd been at Bear Stearns for about five years. We had gotten bonuses and some people went out that evening. I wasn't particularly close to any women at work, but we all found ourselves together as a group, and one very young woman asked us, "Did anyone else, when you got your bonus, did [a certain boss] give you diamond earrings?" She was in this really compromised position, because she was relatively junior and just trying to do a good job and essentially getting hit on. She just wanted to know what she should do. I mean, this is not the kind of thing you ran to human resources over, and if she immediately handed them back, she's insulting him. That was the first time we all spoke really openly to each other, and then the stories started.

Some of what you're talking about is specific to Wall Street, but I think every woman has to grapple with some degree of sexism in the workplace. Right. Aspects of it are universal, like men taking credit for women's ideas. Everyone I know has had this happen. Most meetings I went to, I was the only woman in the room, or one of only a handful of women. And when you have so much testosterone together, it almost snowballs. People are really anxious to come up with good ideas, and there's so much competition.

One thing that we ended up doing to combat the idea-stealing thing was to have a really good advocate who was a guy, someone we were in a lot of meetings with, who would, in a friendly way, just interject and say, "Oh, you mean like the idea that Maureen just had? Maureen, do you want to elaborate on that?" I don't think it was motivated by greed. I think men wanted to run with an idea, to be associated with that idea, and sometimes they just needed to be hit over the head and reminded what the origin of that idea was.

What made you decide to write a novel that incorporated your experiences, rather than a memoir or tell-all? I did try to take a nonfiction approach to it. I had interviewed so many women, and I was trying to tell their stories, some of which were quite horrific. What I was getting myself into was a legal quagmire. I'd be defending myself, and I'd be embarrassing people, and that was never my intention. What I really wanted to do was just show Wall Street through a woman's eyes and tell the stories that never see the light of day, because all these [harassment] lawsuits get settled in the middle of the night, and there's no detail to read about what happened. But I didn't want to take people down. The other thing is, I wanted to talk about the mortgage crisis [in the late 2000s] in a way that people who wouldn't ordinarily pick up a story about Wall Street would read.

You wrote in a New York Times op-ed about a male coworker drinking a shot of your breast milk on a dare. Do you have other examples of that more blatant harassment? In researching the book, because I wanted it to feel more current, I spoke to women who have my old job currently. In our interviews, they would say that that very frat boy behavior has toned down, that it's not everywhere, but then I'd get these emails that always started with, "Please don't use my name, but…"

Here's one example: We had these private dining rooms, where you could meet a client and have lunch if you're working on a deal you don't want to be making in public, which is common in corporate finance. This woman walked into the wrong room, and there's someone that she works with, having a little sexual encounter with someone else. They kind of laughed at her, and when she went out, the waiter apologized for not stopping her, saying it happened all the time.

For me, I felt like my things were mostly just like big brother, joke-y stuff. Once I had a baby, I'd have to get up and publicly walk [my breast pump] past lots and lots of desks. It was a joke; if someone noticed me, he would "moo," and then the other guys would "moo" also, and I would turn red. One other woman had a child. I came back after 12 weeks [of maternity leave] and she said, "You have to wean that baby," but I didn't want to, and so I just kept at it. And that wasn't the only difficult aspect of transitioning back to work after maternity leave: I returned and found a male coworker sitting at my desk, informing me that he'd be partner on some of my accounts.

But I will say many of the lawsuits you do see are things far more—they're women feeling threatened. Or groped. One of the lawyers I interviewed had so many stories, and these were things we'd never seen in the newspaper because they had settled. [At another bank,] there was a bet on who could make a woman's breasts move. They put their money on the table and one of them ran around and just grabbed her, and obviously made her move, and collected the money.

I'm curious about your experience coming back from maternity leave and being a nursing mom back at work and everything that happened with your breast milk. How did you weigh that experience when deciding whether to keep growing your family? You have four kids now, right? I do. I think women have this amazing ability to compartmentalize. What I've heard from so many working moms is that they're so much more efficient than before they had children. You get to work and you are working. You don't care about the chitter-chatter about what people did last night. And then when you go home, you're all in, also. For me, I felt like there was some judgment from coworkers after the birth of my second child, like some of the people I worked with expected me to be staying at home with my kids, and that made me a little sad. When you're working alongside men in high-paying jobs, whose wives might have the luxury of not needing to work, there's sometimes a judgment there—"My wife is at home with the kids."

One of the women I spoke with a few months ago said something heartbreaking to me. She has a 2-year-old and loves her job. Another woman on her trading floor had a baby and at the end of her maternity leave came back and said she wouldn't be returning. So they gave her a little party, and their mutual boss stood up and said, "It's so great; 'Jane' is leaving, but she's doing the right thing." And the woman I was talking to said that tears just came to her eyes with this guilt because her boss obviously thought moms belonged at home with their children, and it made her wonder what her boss was really thinking about her every day.

What advice would you give to a young woman entering the field? To be communicative. To be open, to find people who are more senior than you who you can connect with and learn from. Not in a "Will you formally be my mentor?" sense, but someone that you're comfortable asking questions of. I've heard so many times that women are their own worst enemy, and I've seen that play out. They'll turn on each other very quickly, and so I hope that gets better, and young women who are already in the workplace are cognizant of the people behind them looking up to them and maybe wanting a few minutes of their time each day. That will make them stronger.