In probably the best news you'll hear all day, some real effort is being made to improve the gender wage gap. Last Monday, a federal appeals court ruled that employers can't justify paying women less than men who are doing the same work based on a woman's salary history.

The Washington Post reported that in the case of Rizo v. Fresno County Office of Education, the U.S. Court of Appeals for the 9th Circuit sided with a math consultant who "argued that considering prior compensation when setting a worker’s pay perpetuates gender disparities and defies the spirit of the Equal Pay Act."

“The Equal Pay Act stands for a principle as simple as it is just: Men and women should receive equal pay for equal work regardless of sex. The question before us is also simple: Can an employer justify a wage differential between male and female employees by relying on prior salary? Based on the text, history and purpose of the Equal Pay Act, the answer is clear: No.”

In 2012, Aileen Rizo sued her employer, the Fresno County Office of Education, after learning her male co-workers were being paid higher salaries and had less experience. Rizo trains educators in better ways to teach math to students.

In court, Rizo's employer admitted to paying her a lower salary, arguing that the decision to do so was based on her salary history, not on her gender. However, Judge Reinhardt—who passed away before his opinion was published on April 9—disagreed with this logic.

"Men and women should receive equal pay for equal work regardless of sex."

In 2017, women were earning 82 cents for every dollar a man made, according to a study from the Pew Research Center—which would mean they'd have to work an extra 47 days per year to make up the pay gap. Women of color reportedly are paid even less, making 63 cents to every white male dollar.

“We know one of the challenges women face is they carry low pay from job to job,” said the chief executive officer of the National Women’s Law Center Fatima Goss Graves in an interview with The Lily. “They are losing because there is this huge loophole in our equal-pay laws. This tightens it up.” 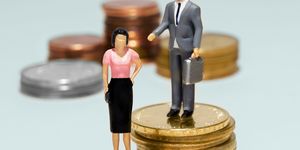 The Truth About the Pay Gap
This content is created and maintained by a third party, and imported onto this page to help users provide their email addresses. You may be able to find more information about this and similar content at piano.io
Advertisement - Continue Reading Below
More From Money & Career
The Budget: Buying a Car
Created for From Marie Claire for Created by Marie Claire for
Capital One
Will Women Be the First People on Mars?
Advertisement - Continue Reading Below
Sallie Krawcheck Schools Us in Investing 101
Dara Treseder Is Why You're Obsessed With Peloton
Talking With the Author of This Summer's Must-Read
The Sacred Boom
How to Afford Your Post-Pandemic Getaway
Katrina Lake Is Still a Boss
So You Want a Postnup
Renee Montgomery on Becoming Co-Owner of the Dream