Today's Top Stories
1
What Makes an Olympic Moment?
2
The Anti-Choice Endgame: Power And Control
3
Nordstrom's 2021 Anniversary Sale Is the Best Yet
4
Give Domestic Workers the Protections They Deserve
5
The Absolute Best Red Lipsticks on Earth
Hollis Bennett / Morgan McMullenGetty Images

Stepping inside Uber’s self-driving-car campus in Pittsburgh, Pennsylvania, feels like walking onto the set of a sci-fi movie. After checking in with security, you’re ushered past a wall of free snacks (as any good tech startup offers) into a bright open space designed for brainstorming sessions. On the other side of a glass wall opposite the floor-to-ceiling windows is a room that's more futuristic garage than trendy startup, thanks to a fleet of vehicles all featuring the same spinning device—called "LiDAR"—on their roofs. What you’re seeing are some of the world’s first self-driving cars.

The site is home to the Advanced Technologies Group, ATG for short, the division of Uber devoted to bringing driverless, autonomous vehicles to the mainstream market. Since launching in 2015, ATG has prototyped five different car models, the last of which—a sleek and shiny white Volvo—currently cruises the streets of Pittsburgh (with a backup driver in the front seat; self-driving vehicles are not yet legal in Pennsylvania). That spinning LiDAR? It’s a 360-degree sensor, the car’s brain, so to speak. It is, in part, what makes these cars move without a person manning the wheel; an innovation that is transforming the transportation industry as we know it.

Autonomous vehicles feel freakishly futuristic but could soon be the new normal. And Uber claims they're necessary. According to data, 1.3 million people die in car crashes every year globally, and 94 percent of critical crashes have drivers to blame (as opposed to car failures or environmental factors). To boot, more than 1 billion cars are sitting idle in the U.S. at any given time, meaning in many cities, up to 20 percent of available land is devoted to parking. With self-driving vehicles, Uber hopes to lower the death toll associated with crashes and decrease the sheer volume of cars on the road. (All autonomous vehicles will be modeled off Uber pool, picking up and dropping off multiple people, rather than transporting a single passenger).

The move away from personal rides and toward a sharing model seems obvious when you consider companies like Airbnb and Rent the Runway, both of which make borrowing feel environmentally friendly and chic. Not to mention cost-effective: Research by investment banking company UBS predicts that autonomous ride-sharing could decrease fares by more than 80 percent by 2030, which would average out to be less expensive than most public transit options.

Behind the industrial machinery, glossy cars, and general cool factor is a team of women quietly working to make the dream a reality. The program is led by ATG’s chief scientist Raquel Urtasun, who works out of the team's Toronto research and development lab.

After studying electrical engineering, Urtasun became drawn to machine learning and started developing algorithms for smaller problems (including an algorithm that scans a user’s photo to determine if her outfit is on point). She founded her own AI think tank, Vector Institute, before joining Uber’s team in 2017 (under the condition that she could keep her lab in Canada, where she is a professor of computer science at University of Toronto). With more than eight years of researching AI-based car technology under her belt, she was armed with the rare expertise needed for the job (a 2017 Wired article dubbed Urtasun an AI superstar).

Listening to Urtasun talk about the tech behind driverless cars, it all sounds so easy. On a 3-D computer model, she demonstrates how one of her self-driving cars can weave through traffic or slow to stop at red light, as if she were playing a video game. But building the brain for an autonomous vehicle isn't child's play: Her team is tasked with creating a single AI algorithm that makes their driverless car smarter and safer than any cabbie.

Part of making tremendous strides in the development of the autonomous vehicles has been recruiting an all-star team of women—despite the massive boys club mentality in the tech space. “I come from the Basque region in Spain, where women have a very strong personality,” she says. One of her first hires was Inmar Givoni. The purple-haired, Israeli-born autonomy engineering manager has a big job: She and her team have to translate research into reality, building software that enables the cars to effortlessly merge lanes or brake if a dog runs into the street.

Givoni is not only the expert engineer at ATG, she’s also the resident voice for women in tech. When she’s not trying to crack the code to autonomous vehicles, she’s leading women in tech conventions and mentoring rising stars within the company and those who want in.

“When I came to Canada, it was the first time it dawned on me that there was an issue with women in computer science and AI,” Givoni says. “In Israel, it wasn’t equal, but I didn’t feel I was being held back because I was a woman. I came to Canada and I started to learn about this problem, and I became really active in the space.” Giovni is trying to change the culture from the inside out, starting as early as the job posting.

“The tech industry already uses a lot of ‘We’re looking for a superstar coder’ in job descriptions,” she says. “Research shows that words like that can potentially detract women and minority candidates. These are places where we need to pay attention.” That's why her team crafts job posts with inclusive language in mind, leaning on words like “teamwork” over “competitive.”

Uber is working toward a goal of complete inclusion in its workforce. (Her leadership team in Toronto is all women.) But how will the company create a car that is safer for its female passengers?

I posed that question to Nastasha Tan, ATG’s head of design. She leads the division that considers the cars from the passenger's point of view, from the positioning of the seats to the number of windows. Creating cars that have the safety of passengers, specifically women, in mind is at the forefront of her design: Though the cars are still in their very early days of development, she's already brainstorming ways to increase rider safety, like the ability for the cars to illuminate the path to the door.

Despite the innovative work by the three women (and a total ATG team of 1,200), the road to, well, driverless roads hasn’t been an easy one: In March of 2018, in Tempe, Arizona, one of ATG’s self-driving cars struck and killed a pedestrian, prompting a nine-month hiatus during which the company reevaluated its safety measures. Since launching ATG, Uber has poured money into the program. Quartz reports that in 2018 Uber sank $457 million into the ATG division, and Uber recently nabbed a $1 billion investment in ATG, despite the business's slipping profits overall and the fact that Uber's IPO was well under previous valuations. (On its first day as a pubic company, stocks were priced at $45 a piece, nearly $30 shy of venture capitalists' initial valuation.) But the team is confident that the extra effort—and fresh funds—will pay off.

Urtasun presenting at an internal Uber women in technology conference.
Courtesy of company

Uber desperately needs driverless cars to work to replenish its massive investment. Of course, by replacing human drivers with robots, Uber is cutting a major expense, an ethical question in its own right; there are an estimated 3 million people who drive as a source of income. There's also the race to be first: Just ask Elon Musk, who recently teased at an investor's day that Tesla could unroll autonomous vehicles as soon as next year.

Urtasun, however, is in no rush. She doesn’t expect cars to drive the streets by themselves for years, and she credits Uber with giving her the opportunity to take her time in creating what she hopes will transform the transportation industry as we know it. She does, however, expect industry culture for women to change well before then. She and her team are certainly doing their part to make that happen: “We’re trying to showcase that it is possible to be a woman in AI," she says. “We’re trying to showcase the possibilities.” 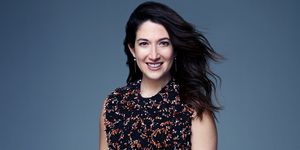 Randi Zuckerberg Is Teaching Tech Girls to Dream
This content is created and maintained by a third party, and imported onto this page to help users provide their email addresses. You may be able to find more information about this and similar content at piano.io
Advertisement - Continue Reading Below
More From Money & Career