Few things about Gwynne Shotwell shout "rocket scientist." Sure, the president of aerospace startup SpaceX holds a mechanical-engineering degree and a master's in applied mathematics from Northwestern University, but she towers above the company's sea of T-shirts and sneakers in her black skinny jeans and sky-high platform heels, happily chats about her love of Chardonnay, and drives a bright-red Tesla Model S (Tesla, like SpaceX, is owned by Elon Musk and operates a facility across the street from SpaceX headquarters in Hawthorne, California) with a vanity plate that's a play on an Elton John song. Yet she spends her days sending hulking pieces of metal into space.

Debunking nerdy stereotypes about engineering is a favorite pastime of Shotwell's because it was, in fact, a sartorial choice that first piqued her interest in the subject. When she was a teenager growing up in Chicago, her mom planned a secret weekend activity: attending a Society of Women Engineers conference. "She didn't tell me where we were going ahead of time because I would not have gone," Shotwell says. She begrudgingly sat in the audience, listening to panel after panel, when a certain speaker caught her eye. "Her shoes were marvelous, her bag matched, and she just made mechanical engineering accessible to me," Shotwell recalls. At the time, she didn't have a particular career in mind, and her mom was pushing her to pick a focus. "I left that event saying, 'Okay, I'll be a mechanical engineer,' because I thought she was cool."

Shotwell's big break—landing a coveted spot at SpaceX—came 15 years ago. After spending two postgraduate years in Chrysler's pre-executive leadership training program, then another year pursuing a Ph.D. (she ran out of money, so she dropped out of the program early and left with a master's), Shotwell moved to Los Angeles to join space-systems consultancy Aerospace Corporation. "They gave me real engineering jobs right away; I built a thermal math model [a map of how different heating and cooling components work together] of a satellite, so it was really intensely technical and analytical," she explains. She worked there for 10 years, followed by a similar role at space-mission firm Microcosm Inc. for almost four years.

"I left that event saying, 'Okay, I'll be a mechanical engineer,' because I thought she was cool."

Then, in 2002, she went to lunch with a former colleague who had left Microcosm for SpaceX. After their meal, he offered to give her a tour of the company, during which Shotwell met Musk. They talked for three or four minutes, Shotwell recalls. "I wasn't looking for a job. I didn't have a résumé," she adds. That afternoon, she got a call asking her to apply for the vice president of business development position. She started at SpaceX shortly after as employee number 11; the company now has more than 5,000 people on staff.

Shotwell was hired to sell rockets to corporate clients interested in launching satellites but quickly expanded her responsibilities: She managed customer and mission work, financials, legal, government affairs, and sometimes found herself vacuuming SpaceX's conference rooms before client meetings. The company—and Shotwell—hit its stride in 2008, when it scored its first major contract, with NASA: a $1.6 billion deal to resupply the International Space Station. Shotwell and Musk had led the conversations with NASA and excitedly gathered the team, back then about 150 employees, in the office's cafeteria to share the good news. "Elon looked a little woeful initially. I was like, What a little bullshitter," Shotwell remembers. "But then he said, 'We fucking won!' And we went crazy."

Earlier that year, Shotwell watched the webcast of SpaceX's Falcon 1 rocket launch from her hotel suite's bathroom at 1 a.m. (Shotwell was in Scotland for a conference with her team; she ran the shower to muffle the video's noise because her husband, an engineer at NASA's Jet Propulsion Laboratory, was sleeping in the other room.) As she watched the Falcon 1 glide through the sky and begin to orbit Earth for the first time, she couldn't contain her excitement. She screamed and, in her pajamas, sprinted down the hotel hallway to celebrate SpaceX's first successful launch with her colleagues. "Totally unprofessional," Shotwell says, laughing, as she recalls the moment. "But it was amazing!"

Crew Dragon, the vehicle that will house astronauts on SpaceX's first manned flight in 2018.
Courtesy of SpaceX

Shotwell was quickly named president and chief operating officer; she says the biggest change was having her fellow VPs suddenly reporting to her. Shotwell worried her new title would cause tension among the team. But Musk showed her the power of a good boss when he eased the transition by chatting with each of her colleagues about his decision to promote just Shotwell. "He did a great job," she says.

To date, SpaceX has secured more than $7 billion in NASA and commercial contracts, successfully executed over 35 launches, and introduced a family of reusable rockets that allow the first stage, the tall cylinder at the bottom of the rocket, to land after liftoff. (Historically, first stages were by-products that, postlaunch, crashed into and sank to the bottom of the ocean.) Reusable rockets pave the way for cheaper and more accessible space exploration. For instance, SpaceX's rockets cost $62 million to launch, and its rockets with reusable parts reportedly cost about $20 million less. By comparison, competitors typically charge more than $100 million for a similarly sized, one-time-use rocket.

But amid the successes, there have been many failures. In June 2015, one of SpaceX's Falcon 9s burst into flames. "I cried, and I'm not a crier," Shotwell says. Last September, another Falcon 9—carrying a $200 million satellite partially owned by Facebook—exploded. "The September one was more difficult professionally; there was just more at stake, there was a customer [satellite] on top," explains Shotwell. "I was not as good a boss after the September failure. I wasn't as patient. I probably showed anxiety more than I did after the June one."

"We need people to self-check their workloads and focus on simplifying their jobs and making the task easier instead of putting their heads down and being a hero."

The explosions put SpaceX's launch schedule more than a year behind; the company is still playing catch-up, despite its plan to launch some 20 rockets over the next year. "The more we launch, the better at it we get. But we don't want people to work 70-, 80-hour weeks all the time. That's not sustainable," she says. Headquarters are relatively laid-back in the 24 to 48 hours after a launch, then ramp up quickly to focus on the next. "We do need people to self-check their workloads. And they should focus on simplifying their jobs and making the task easier instead of putting their heads down and being a hero. You can only do that a couple of times." 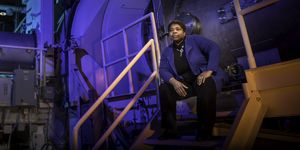 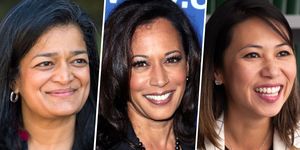 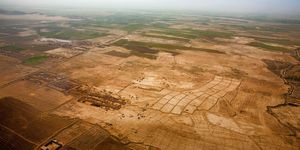 I Fought the Taliban from the Sky

How does Shotwell relax? "I drink a lot of wine," she jokes. "Actually, reading is probably the thing that calms me the most. I have to read to fall asleep." The Outlander series was most recently on her list. Family time also helps: Since Shotwell's husband is an aerospace engineer, it can be easy to venture into geek territory. "He wants to talk about space and Mars and rockets all the time. I always tell him to stop. We have to leave some of that outside," says Shotwell. (The two met in 2002 while volunteering to help University of Southern California students with a satellite project.) Every few weeks, the Shotwells escape to their ranch in Texas. They have two and a half cattle-filled miles of land on the North Fork of the San Gabriel River, and they've been prepping the property so Shotwell can one day turn it into a vineyard.

Texas' dry climate should help prepare Shotwell for SpaceX's next destination: Mars. Its Falcon Heavy rocket will have its first unmanned launch in late 2017, and the Falcon 9 will send a crew to the International Space Station in 2018. (The Falcon Heavy is essentially three Falcon 9 rockets combined, with 27 engines.) Afterward, SpaceX will focus on launching its Big Falcon Rocket (known internally as the BFR, or the Big Fucking Rocket), a massive vehicle—part rocket, part 100-person shuttle—meant to transport citizens and supplies to create a sustainable colony of 1 million people on Mars. Musk estimates that each trip will take as little as 80 days and hopes to start the flights early in the next decade. "I have learned over my 15 years of working with him to not bet against him and not question whether something can be done," Shotwell says. And Musk, it seems, feels equal admiration for Shotwell. "SpaceX is lucky to have Gwynne and I am honored to work with her," he says. "Our company would not be where it is today without her outstanding contribution over 15 years."

And with Shotwell also manning the SpaceX ship, travel to another planet doesn't seem that far, far away.