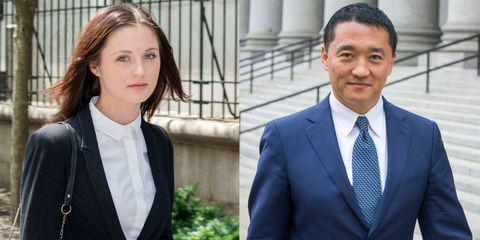 After a bombshell sexual harassment lawsuit that rocked the tabloids, a former Wall Street worker has won a whopping $18 million from her former boss, People reports. Pause for feminist victory dance.

Hanna Bouveng, 25, from Sweden, sued Benjamin Wey, 43, owner of the New York Global Group, claiming he pressured her into a sexual relationship and retaliated by firing and harassing her after she broke it off.

According to Bouveng, Wey, who is married, began pursuing her after he hired her in 2013, but she rejected him. Eventually, after renting her an apartment, gifting her with the likes of Prada bags, and plying her with alcohol, he wore her down—and she was apparently traumatized. "She was debased. She was degraded. She was defiled. He was delighted... He thought he owned her," attorney David Ratner reportedly told jurors.

Hanna ended the relationship, refusing to have sex with him again, but "he said if I didn't show him tangible love, he was kicking me out by Aug. 1," Bouveng told the court of the events that led to her firing.

And this is where the harassment and retaliation comes in: Wey began publishing nasty stories about Bouveng on his blog, and, jealous of her new boyfriend, he emailed racist comments to her father. The harassment escalated to the point where Bouveng felt the need to leave the country and go back to Sweden—but Wey found her in the café where she was working, an alleged threatening gesture that "felt like an intent to destroy whatever I would do," Bouveng said.

Bouveng was awarded $16 million in punitive damages, plus $2 million in compensatory damages, for sexual harassment, retaliation, and defamation, but the jury dismissed her claims of sex abuse. She had originally sued him for $850 million, the Associated Press reports.

"I am so happy and so relieved. I went through a lot and endured over one year of abuse from him," Bouveng said outside the courthouse. Wey's lawyer emphasized that the jury found him not guilty of forced sexual relations. "Of course, we are disappointed in other aspects of the verdict and plan to pursue post-trial remedies vigorously," he told the Post.