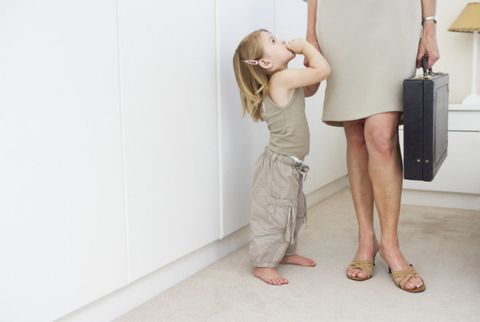 I'd just crawled out of bed, poured my three year old some juice, and situated him in front of Nickelodeon so I could get ready for work when my cell phone began to thrum. Before long, it was a constant vibration, so persistent that for a moment (I'd still not had a cup of coffee) I thought New York was in the throes of some pre-earthquake tremors. Instead, what I found were nearly a dozen emails and texts from friends and colleagues alerting me to "The Opt Out Generation Wants Back In," the startling piece in Wednesday's New York Times which revisited a gaggle of well-heeled, über-educated moms featured in a 2003 magazine cover story, all of whom had willingly (eagerly, even) relinquished their enviable careers to raise their kids full-time. Apparently, a decade later, a good many of them desperately wanted back in.

"Am I allowed to gloat?" read one of the emails, a sentiment I heard over and over again from working women who, upon learning that so many stay-at-homers regretted their "choice", felt gleefully vindicated.

Can you really blame us? For years we've couched our careers as largely driven by financial pressure. Which may have been true to an extent, but left unmentioned was that fact that we actually liked to work, that we savored all those hours far, far away from storytime and Matchbox cars, pureed peas, and Pull-Ups, that we felt energized and stimulated and sometimes even inspired at the office—this though it meant handing off our children, 8, 9, 10 hours at a clip, to caretakers with Caribbean accents. For the longest time, women like us weren't supposed to talk about the mojo we got from our careers, that we actually got off on being in charge and making our own money. We were subjected to glossy lifestyle stories about the new guard of stay-at-home dads (how sensitive!) and marriages upended by the emasculating role reversal of wives as breadwinners. (In addition to the laundry, we are also apparently responsible for our spouse's egos.) We heard about companies installing lavish nursing rooms on-site—pump in private!—as if perks like that trumped actual child care facilities or subsidies so that it'd be easier for us to return to work (and stay there).

We were never allowed to actually crow about our careers and accomplishments, especially if they explicitly came at the expense of child-rearing. Could any female exec have declared as cavalierly that "I don't see [my children] much, but I do email with them," as Tesla CEO Elon Musk noted this past spring in a talk at South by Southwest.

Then a few months ago, I edited an interview for the June issue of Marie Claire with Marianne Lake, the CFO of JPMorgan and one of the most powerful women on Wall Street. Lake talked unabashedly about having a child on her own two years ago at age 40. Hers is, as you can imagine, a demanding job, and some days she's lucky to see her son for 30 minutes. "I try to make it work, but if I can't I just move on. You can't beat yourself up about it," she told us. I was struck by how unapologetic she seemed. When's the last time you heard a successful woman fess up to the fact that she rarely sees her kids—and not lament it? Of course, I anticipated the angry letters and emails that inevitably rolled in, lambasting Lake for effectively outsourcing her son's upbringing. Why bother having a kid? these readers asked. And yet, those comments were overwhelmingly outnumbered by those from readers, most in their 20s, dazzled by Lake's stature and headway in Wall Street's notorious boys club. Her decision to be a single mother was far less interesting to them than her climb to the top and the view from that perch.

That sentiment echoes what we often hear from Marie Claire's twenty-something readers, who have trouble relating to the "juggle" questions we usually ask in our career-oriented Q&A's. To these young women, work-life balance conversations aren't owned by mothers. Some of our younger staffers are training for marathons; others want to take time off for extended trips abroad. They don't make distinctions between motherhood and their own time-consuming, personally fulfilling pursuits, and they don't frame work and family as an either-or proposition.

In 2011, PwC surveyed 4,364 college graduates and found that the vast majority seek jobs based on how much balance they offer. They go in with eyes wide open, and make their choices in part on how much their jobs will impinge on their personal lives. It's a fundamentally different approach to work than that of my generation (Gen X) and the Boomers before me. To be clear, they are no less ambitious or hungry, but the pursuit of riches is on their own terms. Which helps explain why, according to several studies, millennials are more likely to start businesses right out of college. Though start-ups are 24/7 affairs, founders call the shots.

We've found that our twentysomething readers want less content about the work/life balance—indeed, I've seen younger colleagues roll their eyes at the mere mention of the term—and more about relationship-building and networking. For women especially, the job you score is less important than the contacts you cultivate and how to leverage them for new opportunities. Networks are the new companies. (Credit where credit is due: I first heard that useful mantra from Sallie Krawcheck, the former Bank of America exec who in May bought 85 Broads, a global networking forum for professional women.)

Worth noting: the women profiled in the Times piece who were able to transition back into the workforce, albeit at lesser jobs, were those who'd maintained their Rolodexes.