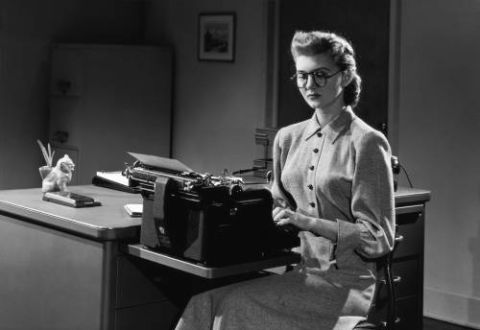 The pay gap is a big problem for women in America. Things may be improved from 50 years ago, but we're still making only 77 cents to every man's dollar. However, for the women working in some jobs, it's even worse than that.

When it comes to equal pay, education is a double-edged sword. While for secondary school teachers, the discrepancy between male and female pay is just 93 percent, but for eduation administrators, the gap is much bigger—in fact, it falls within the top 10 jobs with the largest gender wage gap at a low 69.3 percent, according to ThinkProgress.org. This is a perfect example of the glass ceiling phenomenon—women filling the majority of positions at the entry and lower level, and being weeded out when it comes to the top.

Thanks to news outlets like Forbes and Fortune, we're well aware of the lack of female chief executive officers. It's no surprise, then, that when looking at the salaries of CEO's, that women make just 69 percent of what men make. In fact, when looking at the list of top paid CEO's worldwide, no women even make the top 15.

Women may br receiving good pay (for the most part) in typically male run industries such as construction, but in a few jobs where the majority of positions have historically been held by women, they're lagging behind. Female secretaries and administrative assistants make a measely 82.8 percent of what men do, according to PewStates. For these women, their pay rate is stuck in the past.

Working in the law requires a lot of time, effort, and education. But even for women who finish law school, pass the bar exam, and are hired by a law firm, just like their law school classmates and working colleagues, female lawyers only make 80 percent of what a man makes in the same field, according to the AAUW. However, even though the pay gap for female lawyers has a ways to go, they are still making a fair amount of money, with median weekly earnings of $1,631, according to the Bureau of Labor Statistics—just not as much as their male counterparts.

You'd think working with money would make you money, right? Not the case for many women working in the field of finance. Financial managers make just 70 percent of what a man makes, and personal financial advisers have one of the widest wage gaps of all—women make only 61.3 percent of what men make. Throughout the industry, women in working in finance make a little over 70 percent of what men do. According to an analysis by Bloomberg, the six jobs where the gender pay gap is the worst are in the finance industry.

Education isn't the only field where it's harder for women at the top.Nurses and pharmacists may be doing well when it comes to the pay gap, but that isn't the case for all health care professionals. In fact, doctors, some of the most educated of all workers, have a pay gap that will make you cringe: female doctors make just 63 cents to male doctors, according to an analysis by Bloomberg.

Diana Pearl Producer Diana is a producer at ELLE.com.
This content is created and maintained by a third party, and imported onto this page to help users provide their email addresses. You may be able to find more information about this and similar content at piano.io
Advertisement - Continue Reading Below
More From Money & Career
You Can't Pick Produce on Zoom
How to Afford the Freelance Life
Advertisement - Continue Reading Below
Freelance With Benefits? You Bet.
How to (Mentally) Make the Be-Your-Own-Boss Move
The Gray-Area Economy
Black Women Are Making Their Own Space In VC
3 WFH Tips For Small Business Owners
Created for From Marie Claire for Created by Marie Claire for
Bank of America
The Best Finance Podcasts Out There
The Big Business of Activism
How the WNBA Pulled Off a Slam-Dunk Season