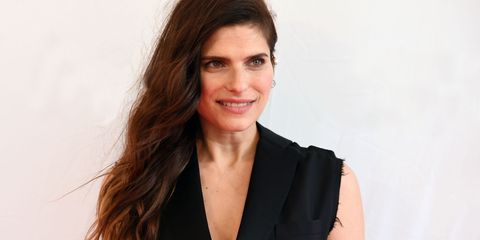 Lake Bell is whispering. "The baby is in the other room, so I'm trying not to wake her up," the 36-year-old actress (and mom to one-year-old Nova with husband Scott Campbell) says so quietly I can barely hear her. But even when her tone is muted, the multi-hyphenate speaks volumes—especially when talking about passion projects, women in Hollywood, and her favorite genre of film.

I caught up with Bell to talk all that and more

Marie Claire: So Man Up is hilarious and such a fun take on a romantic comedy. What appealed to you about the story?

Lake Bell: What I like about the movie is that it's not apologetic about being a romantic comedy—but it's also got a spin and a vibe that feels refreshing. I feel like there's a trend in the genre right now to kind of lean away from it, to be the anti-romantic comedy—to have something R-rated or lewd or cheeky in a way, and what I loved about this was that it was very sweet-spirited. I tend to lean in and be attracted to projects that have kind of, some modicum of likability, and when it comes to comedy, I don't like anything that feels mean-spirited. This felt so classic, it felt like it was sticking to a lot of tropes that are inherent to the genre, but while making it modern and contemporary.

MC: Your character Nancy is uniquely genuine, and while a little bit cynical about love, she doesn't feel like she's a cynic, overall.  Was there anything that you brought to the character that come from your own personal experiences? Or was there a specific idea you had in mind for her?

LB: I mean, at the end of the day, I'm happily married, and I was actually pregnant when we were shooting, so I don't think I was myself in playing this character. That said, I get her. I've been there. And not only that, but I know Nancy through my friends, family, siblings, and whatnot. I wanted to play someone without judgment—just like this is where she is in her life, and I wanted people to relate to her and even like her. Despite her cynicism, I didn't want her to feel misanthropic. She's intelligent and funny and just in a shitty place right now, you know, and I think it kind of lends itself to this kind of zeitgeist that's going on right now—that yes, you can be in your 30s and not have everything figured out. The character in In a World was also in her 30s, and she was living with her parents. It's just kind of making things feel relevant, because they're true feelings.

"Yes, you can be in your 30s and not have everything figured out."

MC: You take on a lot of different roles—actor, writer, director—what keeps you going? What's the one thing that connects these things together?

LB: To be honest with you, what I love—even as a little girl, when I thought it would be cool and interesting to be an actress—I craved creativity. I don't really enjoy working in TV, to be completely honest, even though it's incredibly lucrative, I'm just terrified of not being satiated in a myriad of different ways. It's amazing that I get to create every day, as an actor, or a director, or a writer, and I get to do it in a variety of different genres and worlds and characterizations. I think that's the great privilege of what we do, we get to—sorry for being cheesy, but for a lack of a better expression—we get to make believe. I get to go to so many different places, try on different occupations, take on different points of view. That's what's always been sort of alluring.

MC: So directing, acting, writing—is there anything you tend to gravitate toward more?

LB:  I feel very fortunate to be currently in the position where I can choose to do any of those, or all of them at the same time. With being a mom, I've recently had a priority shift that has sort of thrusted itself on my existence, but I tend to use all experiences as something to work with. Anything that is profoundly, energy shifting—like having a child—is fodder for creative thought. So for me, I welcome it, and look straight into it as something to learn from.

MC: Switching gears to No Escape, the action thriller you star in with Owen Wilson, that was some on-the-edge-of-my-seat filmmaking. What was it like to kind of switch genres?

LB: Hah, yeah. That was one of the more athletic experiences—both emotionally and physical—of my career. But it was phenomenal—shooting in Thailand, in a part of the planet I had never been to, was just amazing. but you know, here I was starring in a movie with Owen Wilson, and it was so somber. [Laughs] Something I never would have thought. But it was important. Wilson was profoundly serious—and it was really sort of him leading the charge and making sure that we had that sort of commitment, so he showed up emotionally every day and we followed suit. He was great.

LB: Well, I'm working on a new project right now, so I almost don't want to jinx it—because we're starting to cast! But you know,  I have such a soft spot for my whole In a World cast. Even when we're not working together, I'm constantly pitching them for jobs, trying to make sure we're all doing something awesome.

MC: You know, speaking of In a World—which is one of my favorite films, by the way—it was your first big directing debut. And a hot topic right now is obviously the dearth of female directors in Hollywood, or even women just behind the scenes. What do you think about all of the attention being paid? Do you have any thoughts on how to make it better?

LB: So many thoughts. This is the topic du jour, and I'm thrilled by it, and the fact that honestly this is like the 90th time I've been asked—because it's a good question—just means we're at a tipping point which feels exciting. I'm always kind of shocked that the studio systems—and this is a broad statement—but they don't think of the female market or there's some sense that the female market is a niche market, while I really feel like in a household, it may be cliché but it's true—the person who is in charge of appliances down to what kind of movie is often times the wife. Even when it's not, it's this rhetoric of "I'll go ask my wife." It's so obvious that females, who are the majority of the planet and who control the purse strings in most households, are not a niche market. And it's so weird to me that it hasn't really been dealt with—it just feels like good business, to have them represented in the same way, if not more, in the entertainment microcosm.

"It's so obvious that females, who are the majority of the planet and who control the purse strings in most households, are not a niche market."

MC: You know, there are a ton of actresses and personalities taking on the title of Director. Angelina Jolie, Amy Schumer—do you have any thoughts on that? Do you think it's at all easier to be taken seriously as a director once you've proven yourself in front of a camera?

LB: I don't think so, I just think you get in the door faster. You get *the* meeting quicker, because you're identifiable on their call sheet. But that being said, an actress does not a director make, necessarily. It's a completely different set of skills, and a ton of tolerance and endurance. I have one guy friend who is a writer, and he got the opportunity to direct and he was like, 'Well, I think I have to do it.' And I was like, 'Well, do you want to?' But he felt like he had to do it or that he should do it, and he did. And he had a miserable time. Which, not that that's funny, but it's kind of funny that he felt like he was *forced* to direct, whereas we're talking about women who can't even get through the door. But that's not the point—the point is is that it's not always what people think it's going to be. Some of my friends they tell me, like 'Oh wow, this is my calling' and others have told me, 'Shoot me in the head, I wish this project was over.' It should be more about getting women who really are invested in directing into those seats.

"It should be more about getting women who really are invested in directing into those seats."

MC: You've kind of done a bit of everything when it comes to both genre and position—is there anything you haven't done yet that you want to do?

LB: There are so many projects on my Dream List. I have so many things in the works, just like little ideas or collections of things or things I write or even just a title of something. But I think doing some sort of superhero movie would be supremely cool. The idea that you suspend belief and can kind of work through a multitude of realms. I don't know that I would want to *write* it necessarily, but the idea is cool to me.

MC: Was there anyone growing up that you looked to as some sort of career icon? Or even people you look to today?

LB: Well, it's so funny—there was never one person that explained or was everything I liked to do. I mean, growing up, there was Woody Allen, and I thought, 'Well, there's no girl Woody Allen.' And he would write these sort of amazing stories, and I thought, that seems fun. Later on, I even sort of looked to Ben Stiller a bit—thinking there's someone else who takes it on, someone who acts, directs, produces...and it's funny to think that it was all males who peaked my interest when I was younger. But now, there are so many women who are just trailblazing and creating their own paths who I admire and look to. Kimberly Peirce, Catherine Hardwicke, Miranda July, Lynn Shelton...so many more. These people just make me think, 'Oh man, it's so great that we're all making movies at the same time'—that we're all making, not female-centric movies, but movies that appeal to wide ranges and different people, including women.

"We're all making, not female-centric movies, but movies that appeal to wide ranges and different people, including women."

MC: What projects do you have on the horizon?

LB: Quite a few, but one of them is my second original work that I wrote and will direct and will co-star, and it's an ensemble comedy about marriage called, What's the Point?. Right now I'm in sort of crazed phase because we're doing the search for financing and it's supposed to start shooting in February, so it's a little crazy right now. But I'm excited.

Check out Man Up in theaters and No Escape on HD Digital today. No Escape will also be available on Blu-Ray/DVD come November 24.