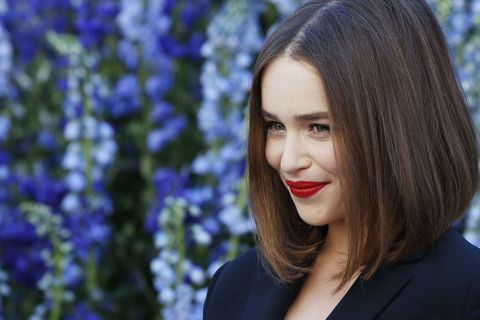 Emilia Clarke's name has become synonymous with Daenerys Targaryen thanks to her flaw-free performance on HBO's Game of Thrones—but she didn't actually fit the part. "The role of the Khaleesi is tall and willowy and blonde. I'm short and round and brown," she said at TheWrap's seventh annual Power Women Breakfast.

"The fact that it was rooted in reality was empowering, to say the least," she said. "I was trying to draw comparison from as many strong women as I could."

Aside from Cate Blanchett—who's turn as an elf queen in Lord of the Rings inspires us on a daily basis—Emilia takes Khaleesi cues from her mom: "I was brought up by a very strong mum. So I was brought up not being told there was a difference between men and women...I never questioned that."

No offense to the ghost of Queen Elizabeth, but Khaleesi clearly owns the feminist throne. (Also, no offense to current world leader, Beyoncé.)