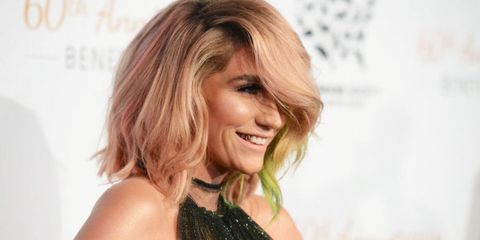 In her ongoing court case against Dr. Luke and Sony (the former of whom she's accused of sexual and emotional abuse, and the latter of whom won't release her from her contract with him despite these accusations), Kesha has been silenced—the only way she can legally make music is with her alleged abuser, so she has stood strong and refused. And the world has rallied around her.

It's been a long and tumultuous road for the star, with seemingly no end in sight, which is why today's news feels particularly victorious: Despite all the drama, Kesha has nabbed a mini residency at Wynn Las Vegas's Intrigue Nightclub, where she'll "revisit her catalog" with performances on June 23, June 25, and July 23.

Good for her, and also, heads up to the fans who will flock to it: the dress code includes no "athletic wear," so leave the leggings, slap on your best sparkly bandeaux dress, smear on some glitter, and LET'S GO.