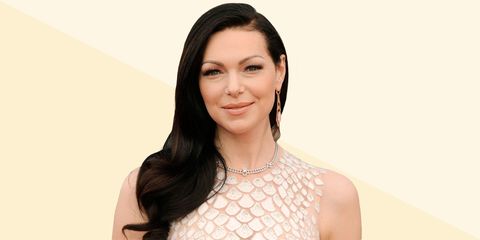 Do you know who Laura Prepon is dating? Probably not unless you're in her circle of friends, in which case congratulations on a truly awesome squad. The Orange Is the New Black star has been a household name since That '70s Show, but she's somehow managed to maintain privacy in a world where being an actress is pretty much synonymous with being a social media star.

Laura chatted with MarieClaire.com about the complicated nature of celebrity, being photographed by the new wave of paparazzi (AKA real people), and—of course—sex scenes on OITNB.

"Now, with social media, everyone has an opinion. If you take things personally, you won't be a very happy person."

Marie Claire: OITNB is such a socially progressive show, so I can't imagine signing onto it and being a super conservative person. That said, what happens when/if your personal social politics do differ from that of the show?

Laura Prepon: The thing about our show is,  you can't take it personally. We go after everything; racism, religion, same sex orientation. Audiences are smart. They want to be challenged and made to think about things, whether they agree with them or not. I don't know, there are a lot of moments on the show where I'm like, "okay, interesting..." but you're playing a character. At the end of the day, it's a television show, and I always try to separate my personal ethics and morals if it makes sense for the character and the material. We're hired to do our job. To pretend. And you do that the best you can.

MC: I feel like every OITNB star inevitably gets asked about filming lesbian sex scenes. And yeah, actors filming straight sex scenes get asked these questions too, but not with nearly as much sensationalizing. Does that ever get old, or feel objectifying?

LP: I don't really let it bother me. And it doesn't really. When we came on the air, the only other show that was really doing same sex relationships was The L Word and Queer as Folk. In general doing sex scenes are kinda strange—whether it's with a man or a woman—but as long as you feel safe and comfortable, it's fine. I always just try to make sure that whoever I'm doing it with feels comfortable. But yeah, when the show first came out there weren't a lot of things like it on the air, and there still aren't. It makes sense to me that we could get asked that question, so I don't think it's objectifying.

"When we came on the air, the only other show that was really doing same sex relationships was 'The L Word' and 'Queer as Folk.'"

MC: I like that perspective: gay relationships don't get nearly enough screen time on TV in general, so maybe that question is actually important—even if sensationalized.

LP: Right, yeah. But I also tend to take things in stride and don't get offended by much. You can't. Now, with social media, everyone has an opinion. If you take things personally, you won't be a very happy person.

MC: It must be so cool to be on a show that's constantly challenging preconceived notions about such important subjects.

LP: Yeah, it's amazing to be on a show that means more than just being an actor for hire. OITNB brings up so many issues and nothing is taboo, which makes my job that much more special and important. We're bringing awareness to these issues, and causing people to think about things and create change. It gives your job that much more validity, and it's amazing—not only doing what I absolutely love for a living, but also being on a show that has such incredible subject matter. Our show's pretty fearless.

MC: Taryn Manning told us that you get scripts nine days before filming. Does that mean you don't know Alex's full arc going into the season? How are you able to plot her development?

LP: It's funny because it's just something I'm used to. If it's a big dramatic thing, they'll tell us so we can work towards that. You just have to trust that your writers are leading you in the right way. You get the script and it's like Christmas morning, you don't know what it's going to be.

MC: You've really managed to maintain a lot of privacy in your personal life. Your Google search mostly brings up interviews and profiles instead of tabloid reports. How do you manage to keep your private life under the radar?

LP: In L.A., you go everywhere in your car. In New York, you're just on the street. I feel a lot more exposed being here, but I do love the city. I'm not really a partier, so I don't go out and party. I'm very careful. I like having my privacy, but that being said, the other day I was walking down the street and my friend told me she saw pictures of me. A photographer caught me and I wasn't even aware. I don't know, girl, I just do the best I can.

"If you're in the entertainment industry you have to tweet, be on Facebook, and have Instagram. It's an interesting dynamic that I struggle with all the time, truthfully."

MC: Do you ever feel pressure to build your brand on social media the same way other celebrities have done? The sacrifice is that your life is out there. It seems like this strange balance that celebs have to achieve.

LP: What's so funny is if you were to talk to my publicist, she would totally laugh because this is something she and I always have these funny arguments about. I'm like, I'm not gonna spend my day updating my social media. I want to enjoy and live my life. I want to let people in, I want fans to know what I'm doing, but there's also a lot I keep close to the vest. With social media, it's really hard. It's a whole new dynamic that I'm not used to. For a long time, I didn't want to be a part of it. But it's gotten to the point where now it's part of our jobs. If you're in the entertainment industry, you have to tweet, be on Facebook, and have Instagram. It's an interesting dynamic that I struggle with all the time, truthfully.

MC: Social media is a constant battle for me and I'm not a famous actress, so I can only imagine.

LP: And also, now everyone's a paparazzi. You're out on the street and people can take pictures with their phone and pop it up on social media. Anyone out there can be a paparazzi now.

MC: Social media's symbiotic relationship with entertainment is one of the most fascinating things about pop culture right now.

LP: For sure, but the thing that sucks is that it's making people less communicative with each other in person. Whatever happened to being present and in the moment, and enjoying experiences with friends and family in real time, and not pausing everything to upload it onto your social? I don't want it to compromise my life. I want to be really present, because before you know it time goes by and it's like, "where the hell did this past year go?" It's a very interesting thing that I am constantly having a tug of war with myself over. And there's no accountability. People set up accounts just to be nasty. I've seen it happen to my friends, and you go to the page and there isn't even a profile. It's like really, why don't you say that to my face. And they never would.

Mehera Bonner Contributor Mehera Bonner is a news writer who focuses on celebrities and royals.
This content is created and maintained by a third party, and imported onto this page to help users provide their email addresses. You may be able to find more information about this and similar content at piano.io
Advertisement - Continue Reading Below
More From Celebrity
Sophie Shared a Stealth Selfie on Instagram Story
Meghan and Diana Had Similar Issues with the Queen
Advertisement - Continue Reading Below
The Queen Insisted on Cutting a Cake with a Sword
Harry Texted Kate, Not Will, When Lili Was Born
Kate's Kids Want Her to Stop Taking Their Pictures
SJP Posted Pics from the 'SATC' Revival Table Read
Kate Wore a Pearl Bracelet That Used to Be Diana's
Harry's HRH Title Was Removed from a Diana Display
Harry and Meghan Are Trying to Keep the Peace
Olympia Wore a Mini Version of Serena's Unitard