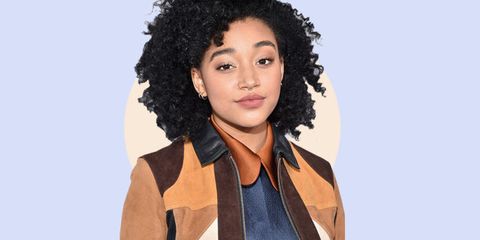 If you've seen the trailer for Everything, Everything, it's probably pretty clear that it's 2017's ultimate teen romance—poised to make you cry, sigh, and thirst for a relationship as loving as Maddy and Olly's. But the film is also a much-needed injection of diversity in a genre that's typically occupied by white cis-gender actors. Not only is the film about an interracial teen couple, it's written by a woman of color, directed by a woman of color, and stars a woman of color, who—by the way—is gender non-binary. It's an example of the kick-ass results Hollywood gets at its most exclusive. It's a movie teens (and adults) should be watching, and MarieClaire.com spoke to the actress at its helm: Amandla Stenberg.

On working with women directors:

"I've been lucky enough to work with three female directors in a row. It's been a coincidence, but something I always keep in mind. This project was really special because not only was the director a black woman, it was written by a black woman, featuring a main character who is biracial, who is in an interracial relationship. There are so many different layers—it's just a more accurate reflection of our world today, because the way we experience life and our relationships with each other is so nuanced."

On the visibility of interracial relationships:

"It was on of the reasons I took the role. It is extremely important to me, and I recognize I have the opportunity to create visibility by being in movies that are willing to be fresher and more daring in their casting choices."

On working on a project with women of color at the helm:

"Working with a community of black women on this project was really special. There are certain things that are kind of unspoken between women of color when they're in a professional setting together. Especially if that setting is more corporate. We knew we were making strides towards creating something like this in a system that isn't always necessarily for it."

On being weary of her platform:

"I worry about it in a certain sense. I hope people online understand that the celebrity culture we've created is not really real. So when they're speaking to and about me, I'm a person, so I'm going to make mistakes. It's inevitable because I'm human. I'm not necessarily weary of the platform, more hoping and encouraging people to understand that I'm just a teenager doing my best with what I have. But for the most part, I'm really excited. But we do place certain people on pedestals, and it's pretty nonsensical."

"Right now, we're ready to question things, to recognize them, to call out when things are not cool. We need to move forward and utilize that tool in a way that is pointed well, and to not just try to tear down everyone. We need to use that skill to tear down people who are actually bad."

On whether all those "Get in Formation" signs held by white women during the Women's March were appropriative:

"I don't know if I can speak on the appropriation of one particular artist's work, I feel like that's kind of up to Beyoncé—not necessarily up to anyone else. But I do think it's important to think about diversity and think about privilege while we're protesting our currently political climate—especially for things like the Women's March. For that to be a conversation we talk about. Supporting all communities in protest."