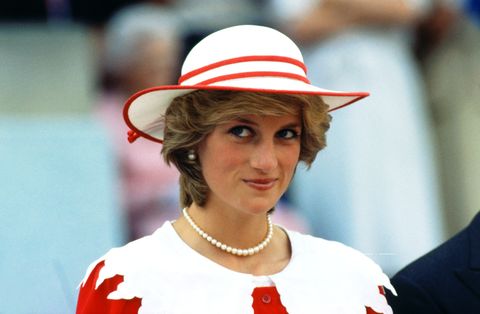 This August will mark the 20th anniversary of Princess Diana's tragic death in 1997 and, as a result, this year will see several documentaries about the late royal's life. The first, CBS's two-hour special, Princess Diana: Her Life, Her Death, The Truth, aired Monday night and dug deep into, well her life, her death, and the ominous truth about both.

The documentary, anchored by Gayle King, touched on Diana's early life (King even recorded segments of the special in Althorp, Diana's family estate in England), but focused on her time in the spotlight as a member of the royal family and after her very-public divorce from Prince Charles.

The special, which contains several interviews with people close to the late princess, revealed some genuinely shocking tidbits, like the fact that Diana and Charles barely knew each other when they got married—they had only met twelve times before taking the plunge. It also detailed some of Diana's struggles with mental health and how her insecurities about her marriage manifested in the form of disordered eating and self-harm. Diana's own openness about her mental health is what ultimately inspired her sons, William and Harry, to launch their Heads Together campaign, along with William's wife, Kate Middleton.

While the documentary rehashes a lot of information that was already publicly known about Charles and Diana's rocky relationship, like their respective affairs, tell-all interviews, and messy divorce, it also delves into the scope of Diana's impact on both the royal family and the world, which can't be understated. A dedicated philanthropist, Diana championed causes that, according to the sources in CBS' special, the royal family would have preferred she left alone, like the HIV/AIDS epidemic.

For older viewers, the biographical portion of the special likely feels like a review of the headlines they were all-too-familiar with in the '80s and '90s, but for younger members of the audience, it's a comprehensive overview of Diana's life and death. I, for example, was only nine years old when she passed away and, although I remember distinctly the impact her death had on the world, I didn't fully understand it at the time. In that way, the documentary serves to educate a new generation about the life of an inarguably important figure (if that generation is tuning into CBS, that is).

The documentary delivers on each point promised in its title. "Her Life" and "Her Death" are mostly covered in biographical terms, drawing from official reports, archival interviews with Diana and other people close to the royal family, and new interviews with some of Diana's confidants. That leaves "The Truth," which digs into the intricate web of conspiracy theories that surrounded her death.

The basis circumstances of Diana's death are well-known. She died in a car accident in the Pont de I'Alma road tunnel in Paris on August 31, 1997. She was on holiday with her boyfriend, businessman Dodi Al Fayed, and being followed by paparazzi at the time of her death. After the tragedy, several people, most notably Al Fayed's father, Egyptian billionaire Mohamed Al-Fayed, speculated that the accident was the heart of a conspiracy to kill Diana. Theories included speculation that the royal family was behind the crash and an ongoing mystery centered on a white Fiat that was allegedly involved in the fatal accident.

After the accident, four independent investigations were launched from two different countries and the documentary, produced by the 48 Hours team, goes through their findings (although not in-depth, on camera, as the conspiracy theory segment makes up just a portion of the two-hour piece). While the special ultimately concludes that (spoiler alert) Diana's death was a tragic accident and not the result of foul play, it does offer some verifiable insights into that night, like the fact that the driver of the car was under the influence, with a blood alcohol level at three times the French limit at the time of the accident.

As impactful as Diana's life was, her death was, in many ways, even more so. Rightly, the documentary also dedicates some time to the most important aspect of her legacy: her sons, and how they are continuing the kind of charitable work she was so committed to during her life.

Kayleigh Roberts Kayleigh Roberts is the weekend editor at Marie Claire, covering celebrity and entertainment news, from actual royals like Kate Middleton and Meghan Markle to Hollywood royalty, like Katie Holmes and Chrissy Teigen.
This content is created and maintained by a third party, and imported onto this page to help users provide their email addresses. You may be able to find more information about this and similar content at piano.io
Advertisement - Continue Reading Below
More From Celebrity
Who Is Alev Aydin, Father of Halsey's Child?
Surprise—Halsey Is Pregnant With Her First Child
Advertisement - Continue Reading Below
Um, Why Is the Weeknd's Face Bloody and Bandaged?
Your First Look at Kristen Stewart as Diana
47 'Friends' Facts Every Superfan Should Know
Eugenie Shared a Rare Candid Snap With Her Husband
Why Serena Didn't Want Olympia to Play Tennis
J.Lo Talked Botox Claims: "Don't Call Me a Liar"
Kate Has Her Own Direct Line to the Queen
Megan Thee Stallion’s Hottie Bootcamp Is Intense