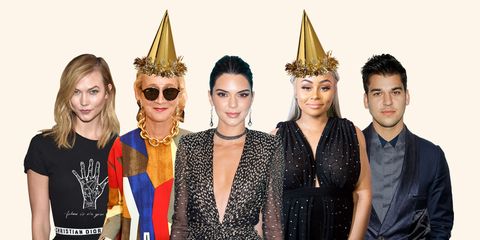 This week in petty...the main themes were shifting loyalties (10-4, no switchin' sides) and the reactions to those shifting loyalties. Welcome to the Petty Party, which is like 60 Minutes but about small-minded events related to famous people.

Like, okay, it's Couture Week, so they're colleagues, basically. So this is not a declaration of war, nor should it be taken as Karlie Kloss Benedict Arnold-ing (or Judas-ing) Taylor Swift—she didn't even throw a Fourth of July party for Karlie Kloss to skip in favor of hanging out in Paris with the sister of the wife of her archenemy! Contain yourselves, please.

When a Kendall Jenner Stan Account Actually Did Go Turncoat

disclaimer: we are aware we should've stopped giving her a pass a long time ago but at least we came to our senses ok

This is why they say never meet your heroes. Or tweet them either, I guess. Earlier this week, former fan site @kjndaily had an epiphany and, instead of tracking the model's movements, "unstanned" and called her out for cultural appropriation and associating with Men with Questionable Pasts. (Their change of heart got them blocked.)

For non-fashion people, this was a short but excruciatingly long week after a holiday. But for people who have even a remote interest in clothes and brands, this was the Week Lucinda Chambers Spilled the Tea—on covers she considered subpar to meet advertiser needs, on being fired from Vogue, and generally, on being chewed up and spit out by the fashion industry. Make no mistake—it takes major cajones to dynamite bridges you've spent 36 years building, so this isn't the petty bit. That would be the mysterious forces who conspired and succeeded in having the story taken down. Bad gateway, indeed. But it's back now, baby—with some edits.

Love you for this, Agata Kornhauser-Duda.

When the Internet Does What It Does Best

Rob Kardashian is on Craigslist selling the bed he used to share with Blac Chyna. pic.twitter.com/DBlxLpNLHS

Which is deal with disturbing events by making memes about them, which might not be the soundest coping method, but, whatever, we get memes out of it. So that is what's happened with Rob Kardashian and Blac Chyna, who are locked in a social-media battle of the wills and receipts. Not to be taken lightly—especially not when there are possible legal consequences—but also, the above Craigslist ad is just too believable not to have a chuckle at.

Chelsea Peng I'm Chelsea Peng, the assistant editor at MarieClaire.com.
This content is created and maintained by a third party, and imported onto this page to help users provide their email addresses. You may be able to find more information about this and similar content at piano.io
Advertisement - Continue Reading Below
More From Celebrity
Phoebe and Pete Wore Matching Initial Necklaces
The Queen to Sit Alone at Prince Philip's Funeral
Advertisement - Continue Reading Below
Royals Announce Who Will Attend Philip's Funeral
Prince Philip Will Not Have a State Funeral
Harry Doesn't Want Drama at Philip's Funeral
How Meghan Feels About Missing Philip's Funeral
Eva Longoria Loves Her Mini Trampoline
The Royals Won't Wear Uniform at Philip's Funeral
Jennifer Lopez and Alex Rodriguez Announce Breakup
Charles Teared Up As He Read Tributes to Philip