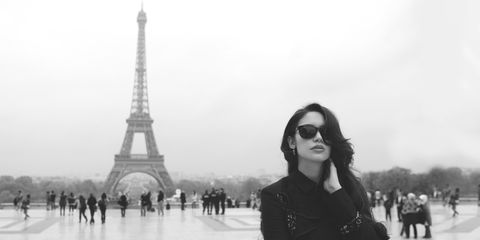 I do this thing where I stare off blankly into space for an uncertain amount of time. My head swimming, I'll nod agreement to questions I haven't heard and sign receipts for cashiers who I don't remember giving my credit card to. I'll eat a whole sandwich at my desk before I realize what I've swallowed, my stomach by then uncomfortably full and the taste a mystery save for what lingers on my tongue. It's really not a great habit.

But I'm lost. I'm off somewhere special in my head, where light reflects off cream-colored limestone buildings and the sky against them is one of the most remarkable shades of blue I've ever seen. There are markets here, brimming with breads, cheeses, and gorgeous, imperfect produce sold to me by impossibly cliche fat Frenchmen and their mousy daughters. I'm holding hands and jumping puddles in the Tuileries with a new lover who's poised to become permanent. I'm eating a rose-flavored mille-feuille.

These aren't daydreams, though—they're memories, as I've actually already run away to Paris. I was eight months out of college, working in a restaurant in Brooklyn, and figured I'd better take off somewhere grand before my $25,000 worth of student debt required me to get an acceptable job with health insurance until I'm 67. But now, three years later, I'm thinking about running again.

The thing about running though, is that it's got to be towards or away from something. And if you can't make sense of your motivations, you might as well just be on a treadmill.

After seven months as an au pair in Paris, my visa strongly encouraged I return to America and I was kind of of okay with that. By then I had glorified every part of NYC—I missed the lights and the bustle. I missed Sunday strolling in Prospect Park with an everything bagel with cream cheese and an oversized iced coffee. I missed people with blue hair on the subway and I missed the cloying, disgusting, impressive American ambition that I buy into so easily.

While in France, I thought about applying to jobs back home and worried about starting real life but failed to recognize that all life is real life, as long as you believe it to be. But for me, the grass is perpetually greener and now neither NYC nor Paris is wholly satisfying. Once I was back in NYC, I listened to Edith Piaf and Georges Brassens and dreamily longed for a film interpretation of a 1920s Paris that doesn't even exist anymore, and that I definitely didn't experience. Everyone there is a writer, an artist, a thinker, or an idealist, or at least that's what you can convince yourself of when you're not fluent in the language. I spent plenty of cinematic days eating bad croissants at the most touristed cafes in Saint-Michel while writing nonsense in a Moleskine like some kind of Hemingway, even though I've never actually finished one of his novels. I loved it.

Am I simultaneously squandering my present and not adequately preparing for my future?

But as these window longings continue on, unrelentingly, my current reality becomes more pronounced. I fear running for many reasons—I have a decent paying desk job now, and have recently come to the gross realization that I actually kind of like it. I'm saving money, but for no known reason other than the nebulous idea of retirement, or a mortgage, neither of which I know or care anything about other than that my peers value these things and I don't want to be left behind. I'm afraid of abandoning a career path in favor of a Paris adventure only to return one day and look around at all my successful friends in their big houses, with their big broods, and fancy vacations while I struggle to catch up. I'm gripped with a perverse anxiety: Am I simultaneously squandering my present and not adequately preparing for my future? But the scales are starting to tip toward convention, which is the most frightening of all.

I'm also afraid that once I'm proficient in French, I'll realize that everyone, in every city, is only talking about how tired they are or their next meal or how much the weather sucks, and not the vague beautiful things I imagine. I fear my aging golden retriever will die while I'm away, still confused why I left one day and never came back. I will break my mom's heart. I have heavy appliances I don't want to pay to ship.

Sometimes I wish I've already lived a grueling New York City life and I was 20 years down the line, exhausted and ready for a change knowing that I had done all I could here in corporate America. But my staring problem is getting worse, and it probably won't resolve itself. The universal truth of it all, though, is that if I don't make a decision, one will certainly be made for me. And if I do decide to run away to Paris, at least this tiny violin will be pretty easy to pack.

The French Know a Thing or Two About Work/Life Balance

Chanel Creates a Full-on French Brasserie for Their Couture Show, Continues to Be the Coolest