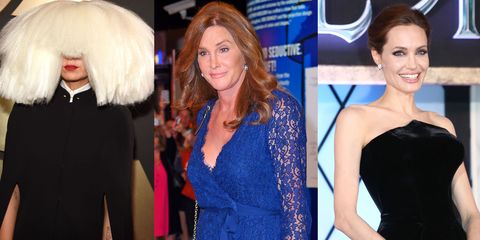 Sia, Caitlyn Jenner, and Angelina Jolie are among the stars who have made this year's ˆPower List. The BBC Radio 4 list aims to identify women who have a large impact on people's lives because of their personal ability to influence others.

Jenner was praised for having the courage to come forward as transgender in a public way, while Jolie has—among other things—been open about her own choices related to breast and ovarian cancer. Sia's influence as an artist and songwriter was acknowledged, as well as her decision to remain faceless in an industry heavily based on appearance.

"Influence is a very difficult power to measure and quantify," said Emma Barnett, who chaired the judging panel. "Many of the women and men who hold all sorts of influence won't be known to the public (or to us the judges)—and deliberately so."

"From running the country to how we think about gender identity, more and more women are in the driving seat," continues Barnett.