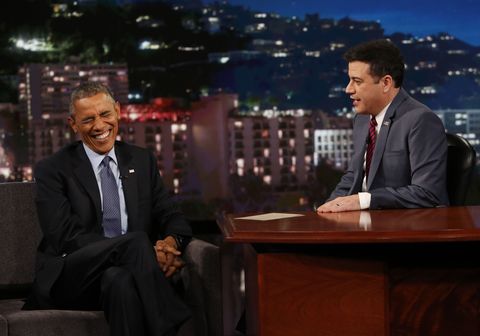 Time and time again, President Obama has shown that he's got a great sense of humor. Whether appearing in a BuzzFeed video, spoofing himself, or making jokes while giving official speeches ("I have no more campaigns to run, I know, because I won both of them"'), the Commander in Chief isn't above making people laugh.

So it's really no surprise that he was completely on board for his own version of "Mean Tweets," that beloved segment on Jimmy Kimmel Live where celebrities read mean tweets about themselves.

Do yourself a favor and watch the whole thing here:

Samantha Leal Senior Web Editor I'm Sam, the senior editor at MarieClaire.com.
Advertisement - Continue Reading Below
More From Culture
Treat Yourself to a Chick Flick Tonight
Who Will Be on 'Bachelor in Paradise' in 2020?
Advertisement - Continue Reading Below
An Investigation Into the Next 'Bachelorette'
'The Bachelor' Has Already Finished His Season
Can We Talk About Kelly's Mom From Love Is Blind?
The Best Reactions to the 'Love Is Blind' Finale
Hilary Duff Hints About 'Lizzie McGuire' Reboot
Ryan Murphy's Producing a Love Letter to Hollywood
This Is When the 'Love Is Blind' Finale Will Drop
Will Gigi and Damian Actually Get Married?