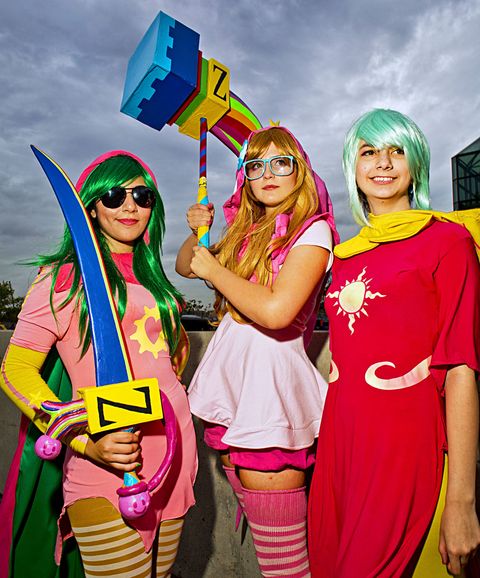 Just because a woman is dressed as "Slave Princess Leia" doesn't mean it's okay to harass her. So says Rochelle Keyhan, a 30-year-old Philadelphia-based lawyer who started the group Geeks for CONsent to battle what she says is rampant sexual harassment at comic conventions like Comic-Con International, which takes place in San Diego this month.

Part of the fun of Comic-Con is dressing up as your favorite character and role-playing (known as cosplay), but some men see women's costumes as an invitation for bad behavior. "Instead of treating you as a person, they're treating you like what they want to do to that character," Keyhan says.

In 2013, Geeks for CONSent started collecting stories from women who were harassed—it has about 30 formal reports and hundreds of informal complaints to date—and found some organizers were doing "almost nothing" to prevent such behavior. So Geeks for CONsent is pushing Comic-Con International to clearly spell out what counts as harassment (currently, its code of conduct includes one sentence that only generally addresses it); to post the policy prominently online, on social media, and on large posters at the event; and to create an app attendees can use to report incidents.

For its part, Comic-Con International said, via e-mail, "We take any report of harassment very seriously." But until Keyhan sees more action, she's vowed to keep fighting. To make sure attendees get the message, Geeks for CONSent members will again add a special touch to their costumes this year: signs reading "Cosplay ≠ Consent."

Claire Trageser Claire Trageser is a journalist in San Diego, where she works for the NPR affiliate KPBS.
This content is created and maintained by a third party, and imported onto this page to help users provide their email addresses. You may be able to find more information about this and similar content at piano.io
Advertisement - Continue Reading Below
More From Culture
Meet the Cast of Netflix's 'Virgin River'
Watch the Trailer for the New 'Euphoria' Special
Advertisement - Continue Reading Below
Zac Clark Could Be a 'Bach' Frontrunner
It's Been a Weird Year for 'The Bachelorette'
This Guy Is a Frontrunner on 'The Bachelorette'
Will There Be a Season 3 of 'Virgin River'?
Unique Gifts for the Coffee Lover In Your Life
Want a Spooky Read? Order 'Plain Bad Heroines'
Listen to These Sad Songs If You Need a Good Cry
'The Undoing' Season 2: Everything We Know