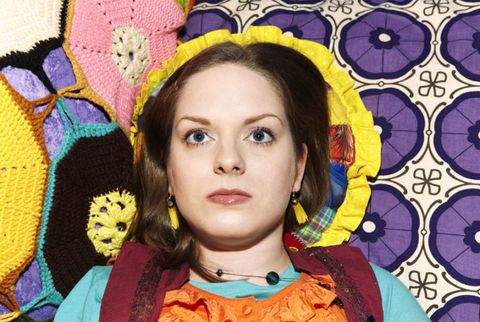 For several years, Katie Miller, a 27-year-old artist based in Parkton, Maryland, 30 miles north of Baltimore, found inspiration in newborns. She nudged her friends, family, and neighbors to allow her to photograph their tiny babies so she could paint painstakingly detailed portraits of them. That work would take hours, so Miller tacked handwritten notes to the walls reminding her to eat and take breaks. "I am so extremely focused that I don't realize I'm hungry or have to go to the bathroom," she explains. "I only later realize my muscles hurt from sitting in one position for so long."

That unwavering intensity isn't just the mark of a die-hard artist. Eight years ago, Miller was diagnosed with autism, the neurological and developmental disorder that affects a person's ability to socialize and communicate with others. Her marathon painting sessions are just the kind of repetitive behavior typical among many with high-functioning autism, often classified as Asperger's syndrome. (The American Psychiatric Association has proposed doing away with the Asperger's designation and folding it into an expanded "Autism Spectrum Disorder" diagnosis.) Miller can be somewhat stilted around others, unsure in her small talk and struggling to understand basic gestures like smiles and winces.

But what's most striking about Miller's autism is that it was even identified at all. Roughly 80 percent of the estimated 1.5 million Americans living with autism are men; because the disorder is so commonly associated with boys, women are notoriously underdiagnosed. "Girls are better at overcompensating for their autism, perhaps because they usually have better communication skills or because the drive for social conformity is more pronounced for them," explains Simon Baron-Cohen, director of the Autism Research Centre at Cambridge University (and, coincidentally, the cousin of comedian Sacha Baron Cohen). In other words, it's easier to discern a problem in a boy who obsessively memorizes baseball stats going back 50 years. But a girl whose autism is expressed by meticulously drawing pictures or who has difficulty making eye contact is a less obvious candidate. "Professionals are worse at detecting autism in females," concedes Baron-Cohen.

When Miller was a child growing up in Florida and, later, California, her parents dismissed her obsessive behavior as the quirks of a budding artist. And to some extent they were. She could fritter away an entire day sketching or copying pictures out of books. "I'd throw a fit if I couldn't draw something right," Miller recalls. But as she grew older, she became more withdrawn. Her worried parents took her to several psychologists. One diagnosed her as having obsessive-compulsive disorder; another said she was depressed. None of their assessments, however, seemed to capture the private, lonely world Miller occupied. "We'd never even heard of Asperger's," explains Jim Miller, Katie's father, a retired engineer at Intel. When she enrolled in the Maryland Institute College of Art, where she earned both a bachelor's and an MFA, Miller began researching her symptoms online and concluded that she might have autism. She presented her findings to a neuropsychologist, who confirmed her suspicions. "It was definitely a relief to find out what was really going on," says Miller.

From all outward appearances, Miller looks like a typical 20-something, though her bold sartorial tastes (bedazzled sunglasses, banana-yellow clogs) point to an unusual sensibility. Still, it's not until you step inside her parents' home, where she lives in a room decorated with bright-blue carpets, an acid-green chair, and a grape-purple couch, that it becomes clear that Miller harbors an uncommon affinity for eye-popping color. "Being autistic has affected my vision of the world, which has affected my art," she says. "I notice different things than other people do, about color, shape, and pattern."

Miller's astounding draftsmanship, her ability to paint with an almost photographic quality, may be related to her autism. Though scientists and doctors can't quite explain it, many with the condition have incredible math, music, or artistic talents. Some experts speculate it may have something to do with the obsessive repetitive behaviors that children with autism develop — they tend to "practice" their craft more intensely and with greater focus than other children. "I owe my painting to a lifetime of focus," explains Miller. "I had a bit of natural ability but mostly an intense interest and drive. I wasn't drawing amazing things when I was a little kid. But I drew a lot, a lot, a lot. I kept at it more than most."

Her autism also makes her acutely sensitive to overstimulation, which triggers a reaction called "stimming" — rocking back and forth or humming, for example. A loud jukebox, a crowded restaurant, even the pungent odor from a grill, can trigger a meltdown of anxiety, tears, and even vomiting. "I hear a loud noise and I have to cover my ears because it's so painful," Miller says. She braces for the worst-case scenario by lugging around a large pair of Day-Glo headphones — the same bulky, noise-canceling model used by construction workers. Putting them on instantly transports her out of the maddening noise to a place of peace and quiet. She also carries a piece of blue fabric dabbed with heavy jasmine perfume, which she holds over her nose when she's overcome by the smell of fish or smoke. Even prolonged eye contact can make Miller uncomfortable. During conversations, she reflexively reaches for a soft, plastic dinosaur in her bag, one of several "stim toys" she keeps in her purse, and squeezes it until she can focus.

All of which made college — and now the art-gallery scene she inhabits — a complicated social labyrinth for her to navigate. "Neurotypicals" — a common term for the neurologically normal — "like spontaneity, socializing late at night, loud places. They like to hang out in bars and go to parties," she says. Any one of those things would send Miller reeling. When a friend walks by and flashes a smile, Miller confesses that she doesn't always know how to read this generic gesture of goodwill. "I don't get the difference between a nice expression and a not-nice expression," she sighs. And despite her all-American good looks, Miller remains single, unable to decode the flirtatious looks and body language that are the preamble to a hookup. "When I tell people that I don't ever get dates, they always say, 'But you're so pretty and talented!'" she says. "But meeting people seems like magic to me" — that is, a mysterious and elusive talent enjoyed by others.

Nonetheless, Miller does maintain a robust social life, having joined the burgeoning network of autism activists. She is an outspoken proponent of the "neurodiversity" movement, which maintains that autism isn't a disease to be cured but a different way of seeing the world, an alternative form of intelligence. To some, autism is an undesirable glitch in the complicated wiring of the brain; the neurodiversity crowd speculates that, in fact, some of history's most successful and creative people had autism. (Bill Gates and Albert Einstein are often name-checked, though neither has ever been confirmed to have had it.) As such, the condition should be nurtured, not isolated and treated.

"I don't have autism — I'm autistic. In the same way you wouldn't say you have femaleness, you'd say you are a woman," Miller explains, as she tidies up her parents' two-car garage, which she converted into a studio. In recent years, she's moved on from newborns. Her work now features oversize toddlers who look, oddly, at once mature, even strangely alluring, yet young and defenseless. Examining one of her paintings, head tilted to the side, she explains, "I suppose you could say I relate to them a lot."

This content is created and maintained by a third party, and imported onto this page to help users provide their email addresses. You may be able to find more information about this and similar content at piano.io
Advertisement - Continue Reading Below
More From Culture
Avengers Fans, Assemble: 'WandaVision' Is Here
Where Is Night Stalker Detective Gil Carrillo Now?
Advertisement - Continue Reading Below
What We Know About Part 2 of 'Lupin'
A Look Back at Princess Anne's Life in Photos
Where Is the Cast of 'Gilmore Girls' Now?
The Most Hotly Anticipated TV Shows of 2021
This TikToker Turned 'Bridgerton' Into a Musical
There's a New Netflix Doc About the Night Stalker
Where Is Richard Ramirez's Wife, Doreen Lioy, Now?
Mainstream Movies With * A LOT * of Nudity