You know that feeling when you’re sitting on your bed, hunched over in head-between-your-legs pain, all because your Aunt Flo, Mother Nature’s Gift, the Red Badge of Courage, or your straight-up, uterus-kicking PERIOD is back for its monthly round of torture? That intense, holy-hell pain that makes you positive you’ll never move from your bed again, because this is the new life your body has chosen for you, and you’ll now live and die beneath your covers? Yeah, we’ve definitely been there, and it truly sucks.

"It's not something you can control on your own, because it's not your fault."

And though we can’t immediately take away the pain, we can tell you you’re not alone: 20-percent of women suffer from such severe cramping that it interferes with their daily activities, like going to work and school, or even running to the grocery store. But that doesn’t make you some sad statistic, relegated to a lifetime of period pain, because here’s the good news: There are treatments, and they come in the magical, mystical form of birth control (no, we’re not just talking about the pill).

But because medical jargon and decision-making and ovaries can be overwhelming, we hounded, grilled, and pestered the top OB/GYNs from around the country to definitively tell us the best types of birth control that are scientifically proven to make your period bearable each month. And, you know, protect you from that whole pregnancy thing, too. Keep reading to find your new relief, and get ready to give Aunt Flo the middle finger.

Why It All Works

Before you can figure out which birth control to try, you need to know what’s actually going on inside of your body. Hey! Don’t just skip over this; it’s legit important, and it could also be a trivia question one day. Because as much as it can feel as though your cramps are somehow your fault, it’s actually your uterus that decides how severe the pain will be during your period, which means it’s absolutely not something you can control on your own.

“Menstrual cramps come from chemicals called prostaglandins getting released from the lining of the uterus,” says Dr. Margaret Polaneczky, OB/GYN at NewYork-Presbyterian and Weill Cornell Medicine. Everyone’s prostaglandins levels differ, which is why some women have more severe menstrual cramps than others, but their role in periods is always the same: They make the uterus contract and squeeze, causing cramps.

Related Stories
Why You're Extra Tired During Your Period 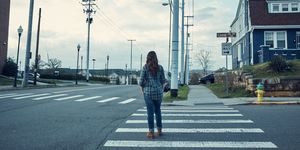 Inside the Mandatory Abortion Waiting Period

Ideally, we could just turn off the prostaglandins in your uterus, but sadly, the body doesn’t work that way. So instead, the key is to reduce them, which can only be achieved by reducing your period altogether. “A lighter menstrual flow means a thinner uterine lining, and a thinner uterine lining helps lower the release of prostaglandins, which results in fewer cramps,” she says. Luckily, any hormonal birth control will thin the lining of your uterus (which sounds scary, but is totally safe and normal), so as long as you choose a method that prevents or reduces ovulation altogether, you’ll find some relief.

But how much relief totally depends on the type of birth control (i.e. the pill, the shot, the ring, etc.) and the combination of hormone levels you and your doctor choose. So to help you with your decision, we've broken down the top categories of birth control that doctors swear will help your cramps best, along with some extra pros and cons to help you break the ties.

“It’s safe to say any birth control pill that contains hormones is going to help a woman have shorter, lighter periods, which, in turn, will help reduce the severity of cramps,” says Dr. Amy Stoddard, an OB/GYN and assistant clinical professor of obstetrics and gynecology at UCLA. However, when it comes to really kicking out your cramps, you’re going to want to stick with the combination pill. Though Dr. Stoddard agrees that both pills are effective, progestin-only pills have a lower track record of stopping ovulation, which means they’re less proven to help relieve cramps.

As for choosing between the dozens of birth control brands on the market (do you go with the commercial of a woman swimming in a lake under the moonlight, or the commercial of a woman hugging a bunch of puppies in a field?!), doctors agree that there’s no brand of birth control pill that’s inherently better when it comes to relieving cramps. In reality, it comes down to picking the pill with the most added personal benefits, like a brand specifically formulated to control acne, or one designated to help with unwanted hair growth. Which is why we’ll say it once...and then again and again: You need to work with your doctor to figure out which type of pill is best for you.

The Depo-Provera shot, AKA the birth control shot, is an injection you get from your doctor once every three months. Just like with the minipill, the shot contains only the synthetic female hormone progestin, which prevents ovulation. The progestin works in your body to reduce cramps by making your period lighter or making it disappear altogether (which, medically, is totally safe).

“Usually, after two or three shots, about three-quarters of women stop getting their period altogether, though it doesn’t necessarily happen for everyone,” says Dr. Anne Davis, an OB/GYN at NewYork-Presbyterian and Columbia University Medical Center. “The shot shuts down ovulation so you don’t have a cycle, and if you don’t have a cycle, you won’t have the bleeding that results in cramping during your period."

And if you’re confused as to why we’re recommending a progestin-only shot when we just said that progestin-only pills aren’t as effective for cramps, it’s because the Depo shot actually reduces your bleeding more than the minipill does, simply because it contains a higher dose of progestin. Less bleeding—or no bleeding at all—equals significantly less cramping.

Although all birth control carries a big ol’ list of pros and cons, most of the typical side effects, like nausea, breast tenderness, irritability, weight gain, and spotting tend to improve after a few months. It’s important to note, however, that the Depo shot is the only birth control method that’s known to cause weight gain in one out of four women over time. It’s not guaranteed by any means, and there’s absolutely nothing wrong with weight fluctuations, but talk with—yes, you guessed it—your doctor if you’re concerned.

Option #3: The Patch and Ring

Yes, we’re clumping these together, because even though they’re nowhere near the same—the patch adheres to your arm, back, or butt for week-long doses, while the flexible ring sits inside your vagina for three-week doses—they both contain estrogen and progestin like the oral combination pill, which means they stop ovulation and, as a byproduct, reduce your chance of cramping. Plus, they’re just as effective as the pill at preventing pregnancy, since they also thicken the mucus on your cervix to prevent sperm from being able to fertilize. 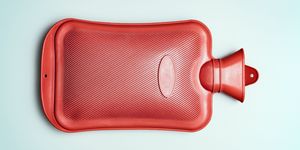 A few extra bonuses: With both the ring (AKA the NuvaRing) and the patch (Xulane), you can easily skip or keep your period by either discontinuing their use for the last week of every month, which induces menstruation, or by skipping the gap week and immediately replacing a new patch or ring for continual coverage. All of which means you can ultimately control how often you’re cramping.

The patch also has the added benefit of feeling just like a Band-Aid on your skin (don’t worry—it only has a five-percent chance of falling off), which, for some women, can feel a lot less invasive than swallowing a pill or having a foreign object inside your body. As will all medications, the birth control you choose comes down to your comfort level.

There’s a reason why OB/GYNs are obsessed with IUDs—they freaking work. Not only do they have the highest rate of pregnancy prevention (99-percent), but they also last for years, meaning there’s virtually no user error or memory involved. And, for once, you've got tons of options to choose from: either hormonal IUDs, all of which contain the same type of progestin-only hormone called levonorgestrel, or the non-hormonal IUD, which uses copper filament to prevent pregnancy.

Within the hormonal IUD category, you’ve got four different types on the market: Liletta and Mirena (the highest-dose IUDs, though still considered low-dose on the spectrum of all birth control options), and Skyla and Kyleena (which contain the lowest levels of hormones across all birth control options). They’re all progestin-only—which we've already said isn't usually as effective at blocking ovulation and cramps—but because IUDs sit within your uterus, they're powerhouses for thinning your uterine lining, which, in turn, lessens bleeding and cramps.

But if you're already overwhelmed by the sheer number of IUDs to choose from, don't freak—some brands are, surprisingly, better for cramps than others. “Because Kyleena and Skyla contain such low amounts of hormones, I wouldn’t expect them to have a big effect on your menstrual cycle and cramping,” says Dr. Davis. “However, Mirena and Liletta reduce the volume of menstrual bleeding by about half, and if you’re not bleeding as much, you’re ideally not cramping as much.” Regardless of which one you choose, though, your period is generally going to be much shorter and lighter with a hormonal IUD than it would be on any birth control pills, which lowers your chances of experiencing severe cramps altogether.

Okay, okay—but what about the non-hormonal IUD? Is there a way to curb cramps and prevent pregnancy without flooding your body with hormones? Unfortunately, no. The copper, non-hormonal IUD (know as Paragard) is a huge no-no for dealing with period cramps. “With the copper IUD, your period will be crampier and a little bit heavier over time, which is something to keep in mind when choosing your IUD,” says Dr. Stoddard. The biggest benefit of the copper IUD is that it protects against pregnancy for a full 10 years, but if you’re dealing with severe cramps already, you may not want to take a chance on making them more painful.

Though all five birth control methods are great options for limiting severe menstrual cramps, it’s so incredibly important to talk to your doctor to determine which method, if any at all, is best suited for your body and lifestyle.

Of course, if you’re not quite ready for any of these birth control options, try an over-the-counter anti-inflammatory instead, like ibuprofen (such as Advil) and naproxen sodium (Aleve), which are top of the line in relieving cramps, thanks to the fact that they work by targeting your sensitive nerves and lowering your prostaglandins production. The best part is that you can ask your doctor for a prescription for generic versions of these medications (yes, really), so you don’t have to pay a crazy amount of money each time you run out of a bottle.

See? We promised you wouldn’t be relegated to a lifetime of hiding under your covers in the fetal position. Now go take some notes, make a doctor’s appointment, and clutch your stomach in agony for the very last time.

Related Story
Could Your Period Get You Fired?
This content is created and maintained by a third party, and imported onto this page to help users provide their email addresses. You may be able to find more information about this and similar content at piano.io
Advertisement - Continue Reading Below
More From Health & Fitness
Olympian Raven Saunders Gets Another Shot at Life
The Cost of Chronic Pain
Advertisement - Continue Reading Below
What It’s Like Living With An Invisible Condition
I Used to Imagine Murdering the Men I Dated
The Best Workout Apps for Women Who Want Results
How I Mental Health: Manolo Blahnik
The Ultimate Smart Water Bottle Is On Sale
Bala's Ankle Weights Are Finally On Sale
CeCe Telfer Has Already Made History
How to Help People in India amid COVID-19 Surge