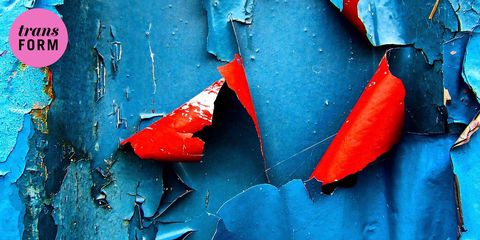 "It is no more okay to ask transgender people about their sex organs than it is to ask Jimmy Carter whether or not he's circumsized," he ranted. "Some transgender people do undergo hormone therapy, or sexual-reassignment surgery, as part of their transition; some do not; and interestingly, their decision on this matter is, medically speaking, none of your f*cking business."

Indeed, asking a transgender person about what's in their underwear is as rude as it is misguided. One size hardly fits all in the transition process. Being a trans woman doesn't mean you immediately pop estrogen, then learn to apply lipstick, then get breast implants, then have a genital surgery, then get a cisgender boyfriend and have happy hetero sex forevermore.

"Nothing is uniform. People go through these various processes at various times, if at all," says Michael Silverman, the executive director of the Transgender Legal Defense and Education Fund.

Because the process can require so many steps, so much red tape, and so much money, there are organizations and medical centers around the country to help trans people make sense of it all… and begin to plan for whatever changes they choose to make. Here are the major steps they can consider.

The first step for many transgender individuals is taking hormones (after a baseline physical to make sure your body can handle them). The changes may be noticeable within two or three months, while the full effects may take up to two years. Christine McGinn, MD, who operates the Papillon Gender Wellness Center, likens the process to puberty. "The trans guys who take testosterone report that they miss the ability to cry as easily," McGinn notes. "They can be short-tempered, and they have a huge increase in libido. Of course, that's all subjective." Their voices will start to change quickly, though they may sound like they have a cold for a while. Trans women may cry more easily, though some will erroneously report their voices getting higher and their hips getting wider. "I say, 'Errr, not exactly,'" McGinn explains. "Estrogen won't affect the bone structure of your hips, though your fat distribution will change."

"The trans guys who take testosterone report that they miss the ability to cry as easily."

"The most popular surgery I perform is breast removal for trans guys," McGinn says. "It's very safe, very easy, and recovery time is as short as two weeks." Breast augmentation for trans women is similarly simple.

As for genital operations, a vaginoplasty for trans women—in which the testes are removed and the skin of the penis is inverted—is significantly easier than a phalloplasty, McGinn says. Both bottom surgeries come with a long recovery, however, where you might be on leave from work for four to six weeks and have trouble sitting, sleeping, or using the bathroom. "It's like having a baby," she says. "The scars and swelling improve in 6 months." She tells patients that their surgery has to be the biggest priority in their lives. "Like any major surgery, patients get sick of not feeling 100 percent. They want to go back to their lives."

What's involved? "A phalloplasty requires connecting blood vessels, arteries, and nerves, and potentially taking skin and muscle from your arm to make a penis," McGinn says. "It can cost up to $140,000 in the U.S., which is why many trans men don't get it done, or they go to Belgium, Germany, or Serbia." Those three countries happen to be hotbeds of progress in transgender medicine.

There are other modifications available for trans guys. Testosterone typically causes the clitoris to grow longer (remember from Bio 101 how similar a clitoris is to a vagina), so some men are happy with that. Others might get metoidioplasty. "It's just releasing the large clitoris from the ligament creating more of a phallus," McGinn says. Further options include creating a scrotum and/or reconnecting a urethra. "It's extremely important for some trans men to be able to pee standing up," McGinn explains.

"Coming out is a process, and then taking legal steps to formalize your transition is a whole other step," says Silverman. "When people are changing their names, it's a legal patchwork. There are dozens of steps, and it varies state by state." You may have to go to court, file a petition, undergo a background check to make sure you're not fleeing your credit-card company or child-support payments, then, depending on jurisdiction, get finger-printed and file a publication of intention for the name change. "It can be complicated, time-consuming, and expensive," he continues, "to the tune of hundreds of dollars. If the person is overwhelmed, they may hire a lawyer, which could then cost thousands. It can be an insurmountable barrier."

"We've handled two cases where we represented transgender women who were denied the right to update the photos on their licenses."

If you want to update your gender marker, you'll have to do it in the state you live and the state where you were born, since it produced your birth certificate. When it comes to identification like your driver's license, "some jurisdictions will require proof of surgical procedures," Silverman laments. Thankfully, the federal government has progressed quickly and dropped its surgical requirements for a gender change, making a new passport or social-security card relatively easier… though spending time at a DMV or passport agency is like a Would You Rather of frustration.

Of course, this overview can't take into account the possible shaming that can occur at these agencies. "We've handled two cases, in South Carolina and Virginia, where we represented transgender women who were denied the right to update the photos on their licenses," Silverman says. "The DMV said, 'Take off your makeup, take off your wig, and look male before we take your photo. That, of course, caused great hardship."

Again, a medical or legal checklist can only scratch the surface of the transitioning process. There are many, many other issues that might arise, like how your boss chooses to handle the change.

It seems pretty obvious that your employer can't legally (or morally) harass you about your transition. But as anyone who experienced seventh grade knows, bullying can be subtle and insidious. "Your manager must offer confidentiality and privacy, with the same dignity and respect as anyone else with a major life change," says Shirley Lin, an attorney who specializes in discrimination in the workplace. "Personal information is confidential, and the employee has to agree with how it will be dispersed among your coworkers."

"Your manager must offer confidentiality and privacy, with the same dignity and respect as anyone else with a major life change."

"Unfortunately, we see that coworkers give rise to ignorance by continuing to use the wrong pronoun," Lin says. "If you correct someone once, and they continue to use the former name or pronoun, they are doing it to undermine or depersonalize, and that is illegal."

The Equal Employment Opportunity Commission issued a landmark ruling this April determining that barring employees from their chosen bathroom, name, and pronoun was a violation of Title XII, the federal law against sex discrimination. That won't completely protect a trans employee from harassment, but it at least gives them an avenue to fight back.

On the medical end, a therapist can help transgender people work through their transitions. It's a source of contention and controversy that some surgeons or doctors require psychological treatment before their patients make any medical changes. "We have mental-health services here, but it's not something we require," Brigham says of the Callen-Lorder center.

"I'm a big believer that someone should see a therapist before they see me," says McGinn, who does require it. "The people who are fine and comfortable with their identity will get mad. They don't want therapy. But I have had patients who don't tell anyone at work, they just come back from 'vacation' and show up in a different identity, causing a circus." She wants to make sure patients have a solid support system, down to the friend who will pick them up after a procedure. "These surgeries are a really big deal, and you have to take care of yourself."

"I performed a gender-reassignment surgery on a 78-year-old who didn't want to leave this earth the wrong person."

It's a lot of work, transitioning to become who you really are. In her short career, though, McGinn has seen astounding progress. "It used to be that my patients were mostly in their 30s, before kids, or their 40s and 50s, after the kids have left home," she says. "I once performed a gender-reassignment surgery on a 78-year-old, who didn't want to leave this earth the wrong person. Now it's mostly younger kids, early 20-somethings, and it makes my heart happy." It's a much longer life span without any secrets or shame, and that is a beautiful thing.

This story is a part of Marie Claire 's features series on what it means to transition today. Check back throughout the summer to read more, or find collected articles here.

Kaitlin Menza Kaitlin Menza is a freelance features writer.
This content is created and maintained by a third party, and imported onto this page to help users provide their email addresses. You may be able to find more information about this and similar content at piano.io
Advertisement - Continue Reading Below
More From Health & Fitness
Power Pick: SoulCycle's At-Home Bike
Yes, You Should Be Taking a Probiotic Every Day
Advertisement - Continue Reading Below
The Best Workout Apps for Women Who Want Results
Pilates Mats for Crushing Your Fitness Goals With
Our Favorite Yoga Apps for Beginners
Stress-Relieving Gifts That Will Put You at Ease
How Do We Find Joy Again?
Dr. Fauci's Advice for Keeping Your Immunity Up
How to Build a Mini Gym at Home
Transitioning in the Age of Zoom