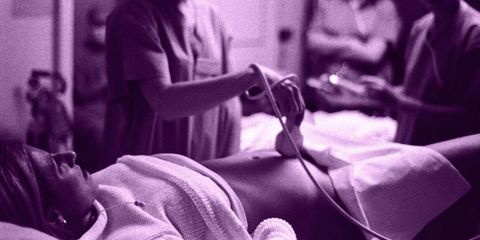 When you're pregnant, people feel entitled, suddenly, to make all kinds of inappropriate remarks about your body. "Wow, you're huge!" Thanks, I hadn't noticed. "What's your birthing plan?" None of your business. "How long are you planning to breastfeed?" Please explain why you need to know this. "Are you going to deliver vaginally?" Uh, that's my vagina you're bringing up on the street.

My husband and I got married when I was 22, and we had our first daughter was I was just 24. We knew we wanted several children, and didn't want to wait. So when Ryanne was a year old, we started trying again.

Nothing happened for a few months, which is kind of odd for two healthy 25-year-olds. Then, after half a year, we found out I'd gotten pregnant. We were elated—and relieved.

But seven weeks later, I miscarried. I had horrible cramps and heavy bleeding, and when I went for an ultrasound, the doctors told me my uterus was empty.

We were crushed, as were the select few family members and friends we had told.

When I went for an ultrasound, the doctors told me my uterus was empty.

Since the vast majority of people in our lives didn't know what had happened, a whole new series of well-intentioned-but-painful exhortations began. "Aren't you going to try again?" "You have to give your daughter someone to hang out with!" "When will you have another one?"

I tried to be gracious and just reply, "InshaAllah." If God wills it. It would be impolite, I thought at the time, to tell them anything else—to describe being bent over, crying in pain as I lost my child. It would be vulgar to explain that maintaining a sex schedule trying to conceive again was sucking the romance from my marriage.

A miscarriage is a death, particularly if your religious belief is, like mine, that life begins at conception. And the simple truth is that death is awkward. So huge and terrifying and confusing that it renders people silent. They worry so much about the right thing to say that sometimes they say nothing at all.

Who are we protecting when we keep the secret even from friends?

In the months after my miscarriage and the years of fertility struggles that followed (I'm happy to report that we've since had two beautiful twins), I wish I had had the patience and candor—the guts—to just tell people what was going on. To advocate on behalf of myself, my body, the millions of women like me. Who are we protecting when we keep the secret even from friends?

And why, for that matter, is it taboo to tell anyone we're pregnant before the three-month mark? If you tell someone you're expecting at just six weeks and then lose the baby, won't you want their support? Wouldn't getting through the pain be a little bit easier if the people you love were aware?

Women's bodies seem to be up for discussion every day in this country—whether for making our own reproductive choices or breastfeeding our babies in public or not hiding the fact that we have periods. The women who fight these fights are sometimes seen as inspirations, but it shouldn't have to be inspiring for a woman to acknowledge her body doing precisely what it was meant to do. It should be normal.

Keeping our health problems secret means they stay mysterious, shameful,and misunderstood. So let's keep talking. Even about the hard stuff. That's the only way to make it easier.

Courtesy of Steffi Aspero
This content is created and maintained by a third party, and imported onto this page to help users provide their email addresses. You may be able to find more information about this and similar content at piano.io
Advertisement - Continue Reading Below
More From Health & Fitness
Considering Changing Up Your BC? Read This First.
Created for From Marie Claire for Created by Marie Claire for
Twirla
Texas DV Shelter Destroyed by the Winter Storm
Advertisement - Continue Reading Below
What We Know About the B.1.1.7 Variant
The “Invisible Disability” You’ve Never Heard Of
Why I Got the COVID Vaccine at 32 Weeks Pregnant
Power Pick: SoulCycle's At-Home Bike
Yes, You Should Be Taking a Probiotic Every Day
The Best Workout Apps for Women Who Want Results
Pilates Mats for Crushing Your Fitness Goals With
Our Favorite Yoga Apps for Beginners