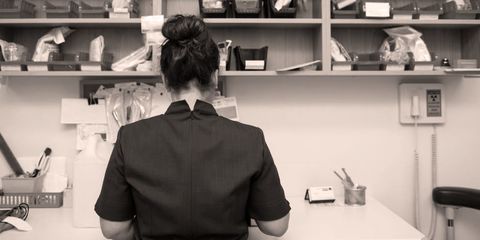 My senior year of college, I worked at a Planned Parenthood clinic. At my orientation, I said, "I'll take whichever part is hardest," so they assigned me to the recovery room. Every Friday morning for a year, I woke up early to escort girls and women from their procedures to one of eight black leather chairs, where I took their vitals, counseled them on birth control, and held their hair while they vomited.

On my first day, one of the nurses said, "Are you pre-med or social work?"

She placed her hand on her hip and cocked her head. "Why the hell are you here if you don't have to be?"

I tried to utter a philosophical answer about women and their reproductive rights and my responsibility to be on the "front lines" of the fight, but she stopped me.

"Whatever you do, just get them to someone who can drive them home safe," she said. "Oh, and wear gloves when you clean up the vomit."

It was going to be much less glamorous than I'd thought. In my head, I was a hero volunteer. In reality, I was a desperately needed extra set of hands.

"Why the hell are you here if you don't have to be?"

I'd grown up as a strict Catholic. When a close high-school friend had confided in me about her abortion years earlier, I had gone silent. In truth, I didn't know how to feel about abortion then. All I knew was what I was told—that it was wrong. It was normal for girls in my school to disappear for a year, then return the next a little weary, a grade behind, and never quite the same. People said they were being sent on missions somewhere, but we all knew where they really were. If abortion was evil, I thought, then giving up the child for adoption was banishment to a life of sleepwalking. Abstinence, our teachers told us. But as I grew older, I couldn't reconcile the disconnect between reality and religion.

At Planned Parenthood, reality ruled. There was no sugarcoating.

The girls and women who showed up for their procedures couldn't have been more diverse. They were mothers of three from regular middle-class families who couldn't handle the financial, emotional, or physical obligations of another child. They were college students who'd used condoms and birth control and still gotten pregnant. And they were out-of-towners who'd made a six-hour drive to cross the state line so they could secure safe healthcare.

I befriended a frantic lesbian who pleaded with me to believe her that she'd only had sex with a man once and didn't even think pregnancy could be possible. There was a sorority girl who couldn't stop crying and screaming, wondering why she was crying and screaming when she knew she'd made the right choice. And there were the many women dizzy from the anesthesia, drooling and exhausted, who tried to leave on their own so they could make their shift at work. These were the patients the nurse had warned me about: Make sure someone is there to take them home.

Just to get in the door, they would have to physically push through protestors who hurled insults and spit at them, even shouting out their home addresses to intimidate.

Every girl and woman who entered my room got a cup of animal crackers and a juice box and however many refills they needed. I'd direct them to the notebooks sitting beside every leather chair, scrawled over by previous patients who needed to put their thoughts on paper. On my breaks, when the room was empty, I'd shove animal crackers into my own mouth and read their notes and cry. These people weren't selfish. They weren't bad. They were people with jobs to go to and families to care for. They were just like me, only a little less lucky.

I used to imagine myself in those leather chairs, on the other side. I would probably be like the lesbian patient, pleading my case, assuming my own guilt—I promise I was careful! I made one mistake!—but I vowed never to make another woman explain herself to me. And while Planned Parenthood itself is responsible for preventing thousands of unwanted pregnancies in the first place by giving out free or affordable birth control, sometimes that birth control fails.

I quickly saw that those who worked on the surgical side at Planned Parenthood were overworked and emotionally taxed. Just to get in the door, they would have to physically push through protestors who hurled insults and spit at them, even shouting out their home addresses to intimidate. While I worked there, a new bill was being proposed that would allow protestors inside the gates, all the way up to the front doors. I huddled with the nurses, all of us wondering, What will we do?

We were lucky. It didn't go through then. But they could still lie down on the hood of a patient's car, posting photos of fetuses between your windshield and wiper while you tried to drive away. That part was legal. That was protected.

When I watched that "gotcha" video with pro-life actors, I think I was supposed to see how laissez-faire Planned Parenthood's attitudes toward abortion and human life were. I didn't. I thought of the veteran Planned Parenthood workers I had met who lived under constant stress. They had families and kids of their own, and when a girl would come in terrified by the protestors, the nurses tried their best not to lose their patience. There are only so many times you can say, This is your choice, not theirs.

Sometimes the nurses would see a "regular." You see, many of the women who seek abortions have already had at least one, and where I used to be on the moral fence about this, I have no qualms about repeat abortions now. You either want to have a child, or you don't, and that can apply every time. Some of the regulars are sex workers, and others simply poor. Sometimes when their husbands wanted sex, they complied, but couldn't get them to give them a ride to the clinic 30 miles away to pick up their next birth-control prescription. I heard variations of that story a lot. The further away a woman lived from a Planned Parenthood, the more likely she was to come in for an abortion.

I vowed never to make another woman explain herself to me.

In my time at Planned Parenthood, I saw people who dealt with the world with pragmatism, practicality, and great empathy. They needed those giant cups of coffee. Their resolve took a hit every time a 12-year-old came in pregnant, crying, and scared. Still, everyone showed up for work, ready for the protestors, ready for the graphic photos plastered to their cars, ready for the attacks on their character for doing what they think desperately needs to be done. But most importantly, ready for the crying girls who had no one but you that day.