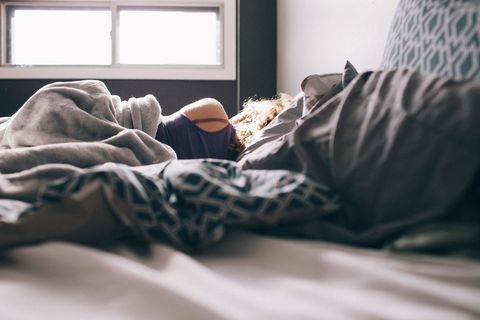 With the world crumbling beneath us—literally and figuratively and gastronomically, because doesn't it seem like all the corn chips you've eaten since November have come pre-broken?—even the hardiest amongst us could really use a hug and/or a big nap right now. But what if you, well, can't? Eighteen percent of the American population suffers from anxiety, after all. 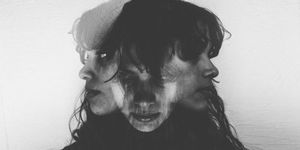 Watch: What It Feels Like to Live with Anxiety

In response to that troubling statistic and another one that says 70 percent of us have trouble falling asleep at least one night a week, the Gravity blanket claims to use 10 percent of your body weight to mimic the effects of being hugged or held, which relaxes the nervous system to help you drift off. (Super-sweet Fact of the Day: Similar tech is used to calm dogs in thunderstorms.) So far, the response to the $169 duvet has been incredible, with its Kickstarter having already raised $2.7 million at the time of this writing.

"But what if I overheat? Will it feel like that old dude in The Crucible who gets pressed to death? But wetter?" you, a Sweaty Betty who's read Arthur Miller, ask. You won't—though high-density plastic poly pellets lends themselves to the "at least I don't *feel* like I'm not generously single" mind trick, the cover is constructed from breathable, ultra-soft microfiber.

Don't you feel more even-keeled already? (Oh, one more thing: Fundraising closes May 30, so if you want to be a proper investor, HURRY. Sorry.)

Chelsea Peng I'm Chelsea Peng, the assistant editor at MarieClaire.com.
Advertisement - Continue Reading Below
More From Home
The Best Nationwide Flower Delivery Services
I Bought the House Next to the One I Grew Up In
Advertisement - Continue Reading Below
All of Your Home Decor Inspo, Right This Way
All the Hidden Costs of Buying a Home
I Bought My First Home Solo With No Realtor
How to Afford a Home
The Best Advice for Solo Home Buyers
All the Single Ladies...Are Buying Homes
A Step-By-Step Guide to Buying a House
Your Down Payment Doesn't Have to Be 20 Percent