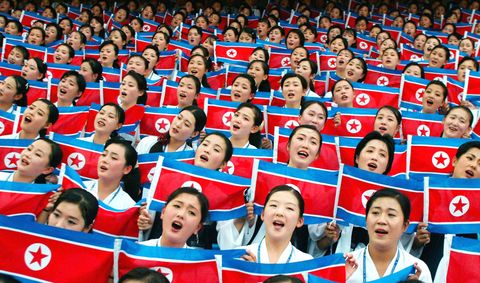 One morning, Mom crossed the point of no return. I saw her stand up, with a look of burning determination in her eyes that contrasted sharply with the despair she had displayed the day before. She was about to do what I would never have imagined possible. She walked straight toward the wall where the portraits of our leaders were hanging, stood up on the tips of her toes, reached out her arms, and removed the portraits of Kim Il-sung and Kim Jong-il; these colored photos of our leaders protected by glass and encased in brown wooden frames. Our two leaders had watched us night and day since my early childhood, like they did in every household in North Korea. Their portraits were everywhere in the country, in every building and on every train in the subway system of Pyongyang. In the quasi-religion invented by Kim Il-sung, these portraits were considered holy objects.

My mom no longer cared. She carefully removed the two sacred portraits of our leaders from their cases, and then took the frames apart. The wooden frames were our last sellable items. In taking them apart, my mom had just committed a crime punishable by death. We had to make sure no on figured out where these sticks of wood had come from. If our neighbors found these pictures outside of their frames, they could denounce us to the regime for "insulting" the two leaders. To be safe, my mom burned the photos.

My mom had just committed a crime punishable by death.

Mom sold the wooden posts from the frames at the market, and with the money she received in exchange, we were finally able to buy ourselves a meal. For the first time in three days, I had something edible to put in my mouth. My mom seemed to have gotten a little bit of energy back. She decided she would also sell our dresser, our last piece of furniture other than the coffee table on which I wrote my will. But at the jangmadang, the black market, the merchants said that the dresser was in too poor condition to sell. The only solution was to chop it up with the ax and turn it into firewood.

But beyond that meager plan, everything was still unknown. How would we survive? The rough winter gave my mother no chance to rest. She also became ill at this time. She could no longer provide for us, so she sent me away to stay with a friend. I left the house not knowing whether I would ever come back.

Mom needed some time to recover her strength. The neighbors worried about her deteriorating health, especially since it was less than five degrees Fahrenheit outside. They said that the ghost of my father would come back to try to take my mother with him. You always had to be wary of ghosts in North Korea. There were plenty of them, and I was always very afraid of them when I was little.

For the first time in three days, I had something edible to put in my mouth.

It was during these last few weeks of winter 1997-1998 that my life took a sharp turn. As we became more and more desperate for food, my mom started to think about the unthinkable: fleeing the country. She began planning to escape from North Korea and head toward unknown territory to save her two daughters. I returned home to see her again at the beginning of February when she started to feel better, and when I saw her, I knew immediately that she had already made the frightening decision: we were going to head to China.

From A Thousand Miles to Freedom: My Escape from North Korea, on bookshelves now. Copyright © 2015 by Eunsun Kim and reprinted by permission of St. Martin's Press, LLC.