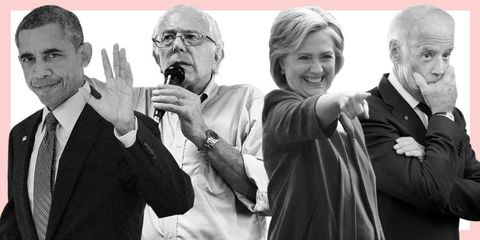 So much has changed since the 2008 election (and not just the grayness of Obama's hair). One of the biggest shifts in the political landscape has been on issues affecting women: many for the better, like gaining marriage equality for gay women—but some markedly for the worse. And when you take a close look at the political priorities of both sides of the aisle since then, it's no wonder that women's issues are now front and center for Democrats in the 2016 campaign.

Remember the "war on women"? It may seem like it's been raging since Biblical times, but the term refers to a very specific—and very recent—political phenomenon. It only came into widespread use after the 2010 elections, when the GOP took over the House and swept many state legislators, embarking on a series of abortion restriction laws and a legal campaigns against the Obamacare birth control provision. It was hugely successful; in the last four years alone, states have enacted 231 abortion restrictions.

And it's far from over. Recently, the Senate voted to defund Planned Parenthood for the first time, just a few days after the shooting at a Colorado clinic (the President has promised to veto the bill). A few years into this war on women, we're now seeing the consequences of restrictive state laws play out: a recent survey found that up to 240,000 Texas women have tried to give themselves an abortion by using black market drugs or other methods (the state of Texas now has only 17 active abortion clinics, down from 41 in 2012).

At the same time, incredible progress has been made in raising issues like paid family leave to the forefront of our national consciousness and political debate. And it's not by coincidence—after the 2012 election, the Democratic party realized that women were not only the majority of the electorate, but are more likely to go blue than men, so their strategy for the 2014 midterms focused heavily on women's issues (and not just reproductive rights).

The momentum has only grown as we near the 2016 presidential elections. Here's how women's issues fared last time vs. this time, and what the difference means:

Scarlet Neath Politics Writer Scarlet Neath is a freelance writer covering politics.
This content is created and maintained by a third party, and imported onto this page to help users provide their email addresses. You may be able to find more information about this and similar content at piano.io
Advertisement - Continue Reading Below
More From Politics
What Liberation Means This Juneteenth
Kathryn Garcia: It's Time to Step Up or Shut Up
Advertisement - Continue Reading Below
A Valedictorian Speaks Out Against Abortion Bans
Standing Between Care and Violence
Seeking Healing a Century After the Tulsa Massacre
What to Know about Texas's Abortion "Trigger Ban"
A New Book Invites Us to Rethink Menstrual Equity
We Must Remember George Floyd's Legacy
This Is How Much Joe Biden Is Worth
Joe Biden's Granddaughter Is His Biggest Fan