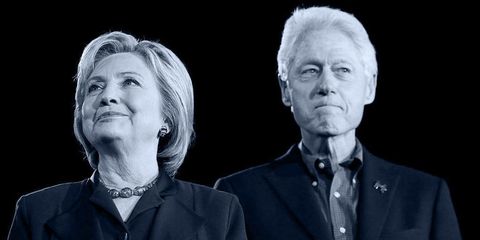 In his first official role as the spouse of a presidential nominee, Bill Clinton did what is normally the role of the future First Lady: give a speech humanizing the candidate. He recounted their history together as a married couple, recast her as "first and foremost a mother," and spoke emphatically about all the work she did while the world's eyes were on him.

But even in this speech, Bill did what wouldn't be considered appropriate in a First Lady (a title his wife's election would morph into First Man—or possibly First Gentleman or First Spouse, TBD): He took aim directly at Donald Trump, depicting him as fake and inexperienced. It was a grand departure from the traditionally more demure "First Lady" speech—and as the potential First Man, Bill might digress from the conventional etiquette in much more drastic ways than that.

He knows better than anyone what the job requires—and, perhaps acutely, how best to support it.

He is, after all, different from every First Spouse before him, not just in gender but in the fact that he once held the office of President himself. He knows better than anyone what the job requires—and, perhaps acutely, how best to support it.

Think of what First Ladies are generally praised for. From Martha Washington to Michelle Obama, the things we love in a First Lady are her clothes, her parties, and her unwavering support of her husband. In its obituary for Nancy Reagan, The New York Times praised her for showering her husband, President Ronald Reagan, with adoration: "Mrs. Reagan was a fierce guardian of her husband's image, sometimes at the expense of her own, and during Mr. Reagan's improbable climb from a Hollywood acting career to the governorship of California and ultimately the White House, she was a trusted adviser." During a segment on the Today Show, Reagan's son complimented the fact that she was "totally dedicated to her husband."

The way Nancy Reagan was praised says more about our concept of the First Lady than it does the woman herself. Will we expect the same servile, decorative bauble temperament from a First Man that we have historically expected from First Ladies?

Based on Bill's DNC speech, probably not. So what will this role entail? And what etiquette should we expect these men to follow?

Here's what we do know: If Clinton does become President, Bill will not be picking out china patterns.

Clinton has indicated that Bill would be in charge of fixing the economy—much more substantive work than most First Ladies are tasked with managing from the desk of their East Wing office. (See above re: having been President.) Clinton has also said that she will be reliant on her husband with an "all hands on deck" approach, depicting him as a behind-the-scenes advisor—a role many First Ladies, like Eleanor Roosevelt, were openly criticized for.

An article in The New York Times goes so far as to encourage Clinton to keep her husband busy: "Historically, when Mr. Clinton does not have a job to do, he gets into trouble." Putting the onus on the woman to keep her man happy has, of course, long been the sexist criticism leveled at the aggrieved spouse—and here we see it again, in 2016.

"Historically, when Mr. Clinton does not have a job to do, he gets into trouble."

In any case, we do know that Bill's unique position as former President means he will not be sacrificing his career, as many First Spouses have before him. "The way he will upend the role of presidential spouse will have more to do with his résumé than his gender," Kate Anderson Brower, author of First Women: The Grace and Power of America's Modern First Ladies, tells MarieClaire.com. "We will only know how the position will change once a woman wins the presidency who has a husband who is a doctor or a lawyer. Then we will see if he will be expected to give up his career for the unpaid and misunderstood position. I doubt it."

We have a model for this: Michelle Obama gave up her career (in health, education, and law) to support her husband's bid for the presidency. In 2009, she said quite frankly, "Clearly Barack's career decisions are leading us. They're not mine; that's obvious. I'm married to the President of the United States. I don't have another job, and it would be problematic in this role. So that—you can't even measure that." She later added that the equality in a marriage ought to be measured over its lifetime and not just over the length of a presidency. And it might be this quid pro quo that we're seeing now in the partnership between the Clintons.

Though perhaps the best model for what it will be like to have a First Man in the White House is the Presidents who had no spouses at all.

Thomas Jefferson, whose wife died before he took office, relied on Dolly Madison—the wife of later President James Madison. Martin Van Buren, also a widower, leaned on his daughter-in-law, Sarah Angelica Singleton Van Buren. Chester A. Arthur was also a widower and had his sister unofficially assume the role of First Lady. James Buchannan was a bachelor, so his niece, Harriet Lane, served as de facto First Lady.

C-Span president Susan Swain has even speculatedthat Bill Clinton could be tossed from the First Man title altogether with the couple's daughter, Chelsea Clinton, assuming the duties of First Lady. Now that would be a coup.

Regardless of the role the First Man takes, it makes sense that Hillary, former Secretary of State and Senator, should have the chance to move back into the West Wing. Think of it as a final renovation of the White House, except it's not wallpaper she's tearing down—it's stereotypes about women.

Lyz Lenz Lyz Lenz is the author of Godland and Belabored.
This content is created and maintained by a third party, and imported onto this page to help users provide their email addresses. You may be able to find more information about this and similar content at piano.io
Advertisement - Continue Reading Below
More From Politics
What Liberation Means This Juneteenth
Kathryn Garcia: It's Time to Step Up or Shut Up
Advertisement - Continue Reading Below
A Valedictorian Speaks Out Against Abortion Bans
Standing Between Care and Violence
Seeking Healing a Century After the Tulsa Massacre
What to Know about Texas's Abortion "Trigger Ban"
A New Book Invites Us to Rethink Menstrual Equity
We Must Remember George Floyd's Legacy
This Is How Much Joe Biden Is Worth
Joe Biden's Granddaughter Is His Biggest Fan