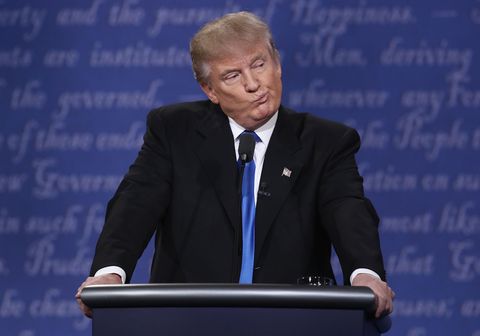 Republican nominee Donald Trump released a video statement late Friday night apologizing for the sexist, derogatory, and vulgar remarks he made during a 2005 "hot mic" interview uncovered by The Washington Post.

"Anyone who knows me, know these words don't reflect who I am," he said in the video. "I said it, I was wrong, and I apologize."

However, after acknowledging that he regretted the comments — which included bragging about sexual assault and grabbing women "by the pussy" without their consent — Trump went on to call it a "distraction from the important issues," and suggested that his "words" weren't nearly as egregious as the "actions" of Hillary and Bill Clinton.

Trump also went on to imply that he plans to bring up the former president's past extramarital affairs during Sunday's presidential debate.

You can read the entirety of his statement below:

"I've never said I'm a perfect person, nor pretended to be someone I'm not. I've said and done things I regret, and the words released today on this more than a decade old video are one of them. [Editor's note: The video is 11 years old.] Anyone who knows me, know these words don't reflect who I am. I said it, I was wrong, and I apologize. I've traveled the country talking about change for America, but my travels have also changed me. I've spent time with grieving mothers who've lost their children; laid off workers whose jobs have gone to other countries; and people from all walks of life who just want a better future. I have gotten to know the great people of our country, and I've been humbled by the faith they've placed in me. I pledge to be a better man tomorrow, and will never, ever let you down.Let's be honest: We're living in the real world. This is nothing more than a distraction from the important issues we're facing today. We are losing our jobs, we're less safe than we were eight years ago, and Washington is totally broken. Hillary Clinton and her kind have run our country into the ground. I've said some foolish things, but there's a big difference between the words and actions of other people. Bill Clinton has actually abused women, and Hillary has bullied, attacked, shamed, and intimidated his victims. We will discuss this more in the coming days. See you at the debate on Sunday."