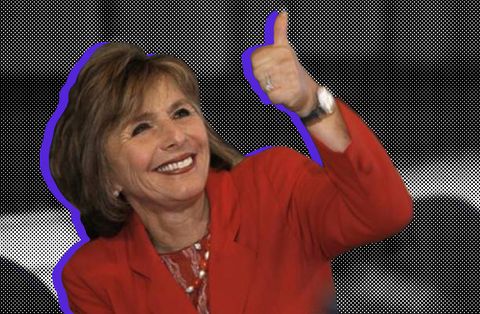 Every Tuesday since mid-October, former senator Barbara Boxer and her filmmaker and activist daughter, Nicole Boxer, who host a political podcast together, have been breaking down everything you need to know about the midterms, from the issues at stake to the candidates who deserve our vote. This week, the mother-daughter recap what actually came out of last week's vote.

As is my post-Senate tradition, I watched the election returns in Los Angeles with 60 or so like-minded friends, colleagues, and family. As we gathered around multiple TVs blaring multiple newscasts, we experienced communal ups and downs in sync with breaking news on each must-win race. Emotions veered as early returns in Florida, Georgia, and Texas looked bleak—our rock stars were losing. But, as the evening danced on, our candidates started flipping seats blue and my heart began to soar.

The magnitude of groundbreaking first-time female candidates elected around the nation is still sinking in. More than 120 women will be sworn in to Congress on January 3, 2019—a pink wave, indeed. Democrats picked up at least 32 seats in the House of Representatives. It’s safe to say we experienced a blue wave, too, despite Republican claims otherwise. We have the momentum—of new voter participation, of a strong ground game among the grassroots, and a continued exuberance for a big win in 2020.

More good news: We elected leaders who reflect the change we desperately crave, representing the beautiful diversity that is America. This new leadership will stand up to those who try to take away our freedoms, like freedom of the press and the right to choose and the right to affordable health care.

Let the lesson of this election be that winning takes hard work by all of us—candidates and supporters alike.

Still, we experienced heartbreak too. We watched some of our favorite candidates, like Beto O’Rourke, come up just a bit short. Losing is part of politics, and there are lessons in it. Many years ago when I was 32, I came up short in my first election and had to face the fact that I lost. Did I give it everything I had? Was I overly confident? Did I let others know how much I needed them to walk door-to-door one more day? The main lesson I learned is to never give up. This cycle, especially bittersweet were the initially apparent losses of gubernatorial candidates Stacey Abrams and Andrew Gillum, who ran dynamic campaigns in the face of radical racism and voter suppression. But it's not over: An official recount is underway in Florida, and, in Georgia, a judge has ruled that all provisional ballots must be counted.

We cannot give up the fight. After my first loss, I won 11 straight elections and was proud to serve 40 years in government. Elections are like life, with ups and downs and joy and sadness, but the best thing about them is they come around again. Twenty-twenty is just around the corner, and we will once again get excited about our new crop of candidates who will make our democracy even stronger.

Let the lesson of this election be that winning takes hard work by all of us—candidates and supporters alike. If we care about our lives and our democracy we must participate so that “a government of, by, and for the people” are not just pretty words, but the reality of the country we love.

You made history this midterm election, Voter. Turnout was historic, with 48 percent of all eligible voters casting ballots. And, your votes are still being counted. Right now, the forces rallying against voter suppression are fighting back. Contested races in Florida, Arizona, and California remain undecided. But here is what we know. You participated.

When you marched, volunteered, phone-banked, donated money, and door-knocked, Americans woke up. And then you voted: by mail, early, absentee ballot, you stood on line, in the rain for hours, and you cast your vote. Some of you even had to use provisional ballots because of harsh voter ID laws. You didn’t give up. These provisional ballots will decide the outcomes of races in Florida and Georgia. In Georgia, Stacey Abrams ran on the very American ideal that every vote counts equally, and a run-off election is in her reach. We have not reached the end of the road yet.

But it isn’t over. In many ways, this is just the beginning.

Hey, Voter, this is just the beginning. This is what democracy looks like. It’s messy and sometimes heartbreaking. Congressional candidates who lost in close contests inspired us, such as M.J. Hegar and Amy McGrath—female military vets who took on seemingly unwinnable fights against incumbents deep in the heart of red America—once again put service above self. Please run again. It was so close. These candidates and others will motivate the next great Americans to take a chance, to run against all odds, too. Who knows—next time it might be you.

At the end of the day we created a blue wave, after all. My mom was elected during another huge midterm flip in 1981—a rebuke of Reagan, the biggest losses since Watergate. But this wave is decidedly bigger, decidedly different. A pink wave, fronted by women who will lead us to values like gun safety, climate science, and green tech development, protection of our health care, and a rejection of political corruption.

Barbara and Nicole predicted the blue and pink waves.
Courtesy

With this change comes a powerful message delivered to the status quo. As we prepare for 2020, here’s my advice: Keep up the momentum. Don’t stop organizing and using your time and voice for good. Our hearts were lifted as we watched historic numbers of women be elected. But it isn’t over. In many ways, this is just the beginning.

Related Story
Women Won Big on Tuesday. Now Let's Get to Work
Barbara Boxer and Nicole Boxer Until the day she left the United States Senate in January 2017, Barbara Boxer was a forceful advocate for families, children, consumers, the environment, and her state of California.
This content is created and maintained by a third party, and imported onto this page to help users provide their email addresses. You may be able to find more information about this and similar content at piano.io
Advertisement - Continue Reading Below
More From The 2018 Midterm Elections
How Ilhan Omar's Speech Started Is Important
You Should Get a Dog! A Retired Greyhound!
Advertisement - Continue Reading Below
What the Election Results Mean for Abortion
Women Won Big on Tuesday. Now Let's Get to Work
Deb Haaland Will Rep Indigenous People Nationwide
The Greatest Feminist Wins of the Midterms
Gretchen Whitmer Is Ready for the Top Job
Every Celebrity Who Voted in the 2018 Midterms
30 Celebrities Who Have Endorsed Politicians
Olivia Wilde's Mom Is Running for Congress