Today's Top Stories
1
Could This Be the Last Year of Roe v. Wade?
2
What to Buy From Madewell's Secret Stock Sale
3
The Inaugural Concert Was a Cheesy Balm
4
Jaclyn Rothenberg Pursues Pantsuits In Every Color
5
Listen to the Best New Love Songs of 2021 (So Far)
Ashley Gilbertson / VII / Redux

In 2014, when ISIS invaded Amira’s hometown in eastern Syria, most of her village of 200 people went into hiding. But Amira saw the invasion as her chance to escape. “I told my family I was afraid of the war,” says Amira, 30, who, like all of the refugees in this story, asked us to use a pseudonym to protect her safety. “But really it was so much more than that.”

She had been married off to her 32-year-old first cousin when she was 17. The age difference made her ill, she says, but in her conservative village, where girls typically married young to men chosen by their families, she had no choice. Shortly after the couple wed, Amira’s husband became verbally abusive and controlling, forbidding her from talking to any man who was not a relative. “I had no idea what love or happiness was,” she says. “I was in a prison of my own traditions.”

Amira and her husband left Syria together shortly after ISIS arrived, setting out on notoriously dangerous, weeks-long journey across the Aegean Sea to Europe. She prayed not only that she would survive but also that her new home in Berlin would offer her true independence.

I had no idea what love or happiness was. I was in a prison of my own traditions.

Over the past three years, more than 1.4 million refugees have come to Germany, a majority of whom are from Syria. A growing number of women are using displacement—and the distance from parents and tradition that comes with it—to break free not just geographically but psychologically. “I have never seen so many people from one nationality want to get divorced,” says Najat Abokal, who, as one of the only female Arabic-speaking lawyers in Berlin, has become the go-to for Syrian women filing for divorce. “I’ve seen many people from many different countries immigrate to Germany, but I’ve never seen a social structure break down like it has among Syrians,” Abokal continues.

There is little research and no formal statistics on Syrian refugee divorce rates in Germany, but Abokal says the spike in Syrian women specifically who have come to her for assistance is dramatic. Her clientele ranges in age from 16 to 40, and while she is quick to say no two cases are the same, the common themes are domestic abuse and financial manipulation. “Once they arrive in Germany, women are able to make a sort of revolution,” Abokal says. Asylum seekers in the country are entitled to social benefits, and even if they are still legally married, women can claim benefits independently so long as they can prove they are separated from their partner. For many, this financial independence equals freedom.

Divorcées are finding support and camaraderie among one another. “So many of us have left our husbands at this point,” Sara, 34, says wryly, her dark eyes sparkling as she pours a group of her girlfriends tea in her living room. Sara divorced her husband, a fellow Syrian refugee she says was a philandering and abusive alcoholic, a year ago. She’s now enjoying life as a single woman, taking classes to learn German and working as an Arabic instructor to support her family of three.

I have never seen so many people from one nationality want to get divorced.

Some of her friends are also single mothers. “I left my husband behind in Syria,” says Nisreen, 31, who is from the Kurdish city of Qamishli in northeastern Syria. She met Sara “on the road”—code for the grueling refugee route from Turkey to Germany—which is where she realized she was pregnant. It was too late to turn back, so she trusted what she had heard about Germany’s social welfare system, hoping she’d be able to raise her child on her own there. Her son is now three and has adapted well to the only country he’s ever known.

For Amira, the transition to life as an independent woman was more challenging. It was one thing to imagine the possibilities while she lay awake looking at the stars in the camps she and her husband stayed in on the way to Germany, it was another entirely to look him in the eye a few weeks after they arrived in Berlin and tell him that she was leaving. “He did not accept it,” she says. At the time, they were living in a sports arena in Berlin with several other refugee families; Amira hoped that the lack of privacy would protect her from his wrath. “He told me that I was a whore, and that I had always been a whore,” she continued. Still, emboldened by the knowledge that she had the right to divorce if she was separated for at least one year, Amira moved in with a friend as soon as she could, and started studying German, waiting for a year to pass so that she could leave her past behind once and for all.

Her divorce was finalized last year. Away from the oppressive gaze of her husband, she started dressing differently, trading the traditional long dresses she had been expected to wear in Syria for jeans and T-shirts. One day she took off her headscarf and let her chestnut-brown hair cascade over her shoulders. She never put it on again.

Amira is now enjoying learning German and sees studying the challenging language as fulfilling. It’s also how she met Johannes, a handsome aide in her first-level German class. “Every time I saw him, I felt my heart start pounding. I didn’t know what I was feeling,” she says, recalling the thrill of her first-ever crush. One day, Amira mustered up the courage to send Johannes a message on Facebook. She never received a reply. “At first, all I could do was cry,” she says. “But then I realized something. I did it—I took a chance on love, with someone I chose. It didn’t matter that he didn’t respond. My life was not over; it was just beginning.” 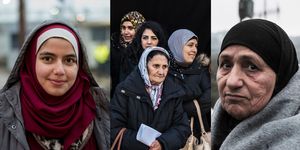 The Women of the Syrian Refugee Crisis
This content is created and maintained by a third party, and imported onto this page to help users provide their email addresses. You may be able to find more information about this and similar content at piano.io
Advertisement - Continue Reading Below
More From Deep Dives
Teleabortion: A Bitter Pill
Indigenous Reindeer Herders Fight for Their Rights
Advertisement - Continue Reading Below
Hark! The Herald Dolly Sings
Presented by
American Greetings
Season’s (and Other...) Greetings
The Global Fight for Black Lives
Marvelous Women
To Save Victims, We Must Dismantle Purity Culture
How the World Fell Madly in Love With ‘DDLJ’
The Good Husband
The Gender Gap