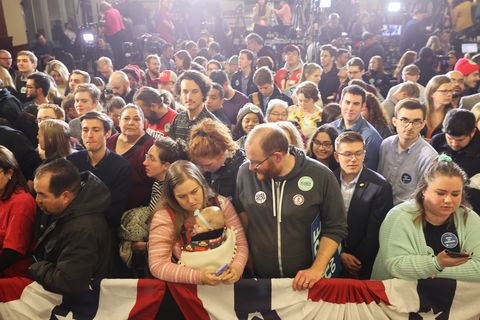 Heading into my very first Iowa caucus, I knew it would be a bit confusing. No matter how many times someone describes the process to you, no matter how many explainer videos you watch, you have to do it to get it. Iowans say once you do, you’ll understand both how it works and why it’s such a valuable way to run an election. And so, even though many journalists choose not to caucus, and many news organizations don’t give their journalists the choice to do so at all, I decided to participate.

And now that I’ve done it, I hope I never get to do it again.

My precinct’s caucus was as well-run as you could reasonably hope for. It wasn’t until I got home at 10 p.m. and turned on CNN that I learned there was confusion about the procedure and a delay reporting results across the state—you wouldn’t have known it from where I, along with 528 other caucus-goers, lots of them first-timers, were standing. There was enough space and enough seats, and though there weren’t enough (ok, any) snacks allowed at our venue, there was a 24-hour donut shop in the building.

Some of the first-timers, myself included, were genuinely warmed by the communal experience of the caucus. As I waited to check in, I recognized a man who teaches ballet at my local dance school, and once I was seated inside, I spotted a guy who lives just a few apartment doors down from me.

Voters and campaign staff members sit in the stands before the start of a caucusing event at Drake University in Des Moines.
Tom BrennerGetty Images

“It’s nice to see people coming out from the community for anything,” a woman named Veronica told me as she stood with her friends in the donut shop after the first alignment. People’s first choice ballots had been counted, and two candidates—Sanders and Warren—had enough people in their sections to be viable, and their supporters were allowed to go home. It was a rowdy social event, and Veronica said that spending an hour or so sitting with a few hundred fellow Bernie Sanders supporters made her feel a sense of solidarity.

And where some people find solidarity, others feel peer pressure. What happens to people, especially women, who feel compelled to caucus in a way that won’t make the men in their lives uncomfortable? We already know that husbands-as-blockade makes it harder for women to get connected with campaigns in the lead up to the caucuses. What happens to those women on caucus night, when they don’t have the privacy of a secret ballot?

Since I moved here 18 months ago, I’ve raised the concern about what the lack of a secret ballot means for women (women Democrats; the GOP uses secret ballots in their caucuses). In response, I’ve been told repeatedly that there’s something special, something pure and inspiring, about asking people to make their commitment to a candidate public. But there’s nothing inherently more moral, and certainly nothing democratic, about a system that adds the risk of public or intimate intimidation to the many barriers to voting that already exist.

What happens to those women on caucus night, when they don’t have the privacy of a secret ballot?

Veronica’s friends Kristen and Josh are married, and caucused for different candidates: She was for Warren, and Josh, along with all their other friends, was for Sanders. Both were first-timers. Kristen said she didn’t feel peer pressure to caucus with her husband, but was buoyed to find that, in the Warren section of the room, there were other married couples with the same gendered split. “So we weren’t alone.”

Despite our well-run site, high turnout left people overflowing into the lobby and queuing out in the cold as they waited to check in, and it meant we started well after 7—something people who had to work early the next day, or who were paying for childcare by the hour, could surely have done without.

Just inside the auditorium that served as the caucus location, I met first-timer Claire, a geology major at the University of Iowa who was about to race home to get to bed by 9:30. She had an early start Tuesday morning, and her candidate, Buttigieg, hadn’t been viable in the first alignment. Like approximately 250 other people, she stuck around for the realignment, hoping that she and her fellow supporters could convince a few more Iowans to vote their way. (They eventually got the 80 bodies necessary to reach viability.)

The lack of privacy, the time commitment, and the demand to show up in person make caucusing inconvenient to the point of inaccessibility for so many people. Even without reporting app screw-ups and delays in determining results, this system is broken.

There has to be a better way to do it. A better, more inclusive way. If Iowa is going keep voting first—and plenty of people would argue that it shouldn’t—then the very least it can do is ensure that some of us aren’t second-class.

More on the Democratic Presidential Primary
AOC & Bernie: The First Couple America Needs?
15 Minutes With Elizabeth Warren
Chloe Angyal Chloe Angyal is a journalist who lives in Iowa; she is the former Deputy Opinion Editor at HuffPost and a former Senior Editor at Feministing.
This content is created and maintained by a third party, and imported onto this page to help users provide their email addresses. You may be able to find more information about this and similar content at piano.io
Advertisement - Continue Reading Below
More From Dispatch from Iowa
Women of Color Ruled Last Night's Debate
Door Knocking With Field Organizers in Iowa
Advertisement - Continue Reading Below
AOC & Bernie: The First Couple America Needs?
15 Minutes With Elizabeth Warren
Noticeably Absent From the 3rd Debate: Abortion
Biden's Record Can't Hide From Gillibrand & Harris
A Beginner's Guide to Being a Political Wife
Cory Booker Gets Real About Reproductive Justice
Male Candidates' Stances on Reproductive Rights
The Cost of Child Care Is Crushing U.S. Families