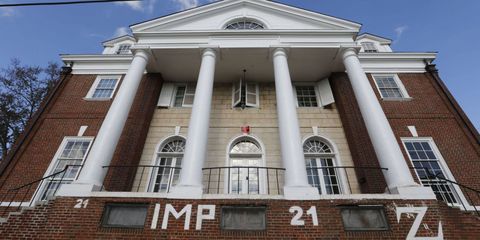 University of Virginia officials have reinstated the Phi Kappa Psi fraternity after an explosive Rolling Stone story alleging a gang rape there turned out to be flawed, the school announced Monday.

According to a press release, the school made the decision after consulting with local police, who said they could not uncover "any substantive basis to confirm" the November Rolling Stone report.

The article told the story of a girl named "Jackie," who said she was gang raped at the Phi Kappa Psi house during her freshman year. The story sparked outrage, but it unraveled after critics took issue with some of the reporting. Rolling Stone never said the rape didn't happen but eventually admitted there may have been "mistakes" in the reporting and said they regretted not contacting Jackie's accused rapists.

Despite the article's issues, the allegations prompted the school to suspend Greek activity and take a hard look at rape culture on campus. "This has prompted us to take a closer look at ourselves and what role organizations like ours may play in this problem," Phi Kappa Psi chapter president Stephen Scipione said in the statement. "It's opened all of our eyes to the problem of sexual assault."

UVA has worked with fraternities on campus to come up with new rules about alcohol and safety for members and guests. These rules include a ban on kegs and pre-mixed punch like "jungle juice" that's often served to female party guests. Frats must designate "sober brothers" during any event and have bottled water at the ready. (Of course, the rules had already banned underage drinking.)

The school will now let Greek organizations resume social events, as long as each chapter signs on to the new agreement. "We welcome Phi Kappa Psi, and we look forward to working with all fraternities and sororities in enhancing and promoting a safe environment for all," UVA president Teresa A. Sullivan said.

Study: 1 in 3 Men Would Rape if They Wouldn't Get Caught or Face Consequences