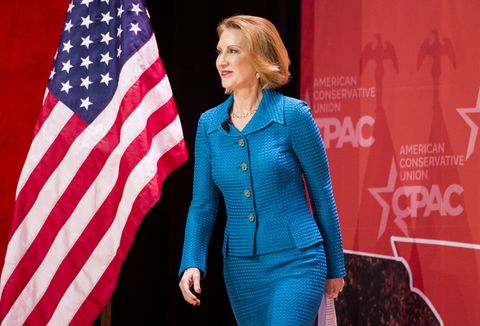 Another candidate has just entered the presidential race, and she's made it very clear she's gunning for Hillary.

In a video announcing her run, former Hewlett-Packard CEO Carly Fiorina plays up her Washington outsider-ness, switching off a Clinton TV spot before differentiating herself from the "professional political class."

"[Our founders] believed that citizens and leaders needed to step forward," Fiorina said. "We know the only way to reimagine our government is to reimagine who's leading it."

Fiorina is one of the first female candidates to seek the Republican Party's nomination, following Michele Bachman and Elizabeth Dole. Learn more about the new candidate below!

Chelsea Peng I'm Chelsea Peng, the assistant editor at MarieClaire.com.
This content is created and maintained by a third party, and imported onto this page to help users provide their email addresses. You may be able to find more information about this and similar content at piano.io
Advertisement - Continue Reading Below
More From Politics
In Conversation With Secretary Granholm
Laphonza Butler on What's Next for EMILY's List
Advertisement - Continue Reading Below
Anita Hill Believes We Can End Gender Violence
For Teachers, Going to Work Can Mean Life or Death
Want to Help Moms? Prioritize Menstrual Equity
Abortion Rights Start at the State Level
All of Your Abortion Questions Answered
The Texas Abortion Snitch Site Is Having a Bad Day
The Future of Afghan Women Depends on Us
How You Can Help People in Afghanistan