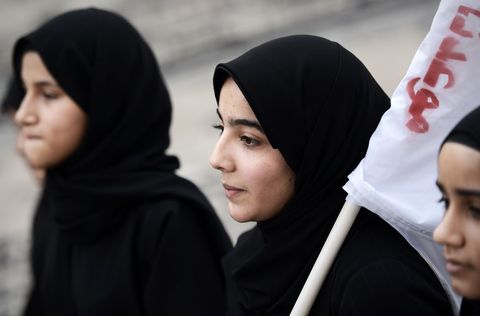 In Saudi Arabia's 83-year history, men have been the only citizens allowed to vote in public elections. Until now.

A royal decree passed in 2011 is finally coming into effect: Women will be allowed to vote—and run—in municipal elections come December 2015. Arab News reports that since the announcement, 70 women have indicated their intent to run for office.

And this weekend, women began signing up to cast their ballots. Safinaz Abu Al-Shamat and Jamal Al-Saadi, from Makkah and Madina, were the first two on record.

"The participation of the Saudi women in the municipal elections as voters and candidates was a dream for us," Al-Saadi told the Saudi Gazette. "The move will enable Saudi women to have a say in the process of the decision-making."

But how much of a say remains to be seen. In a country where women rarely have a voice, publicly or privately, there are doubts about the impact of the gesture. At the very least, it's a not-insignificant step in the right direction.

Jessica Pels Editor-in-Chief As the editor of Cosmopolitan, Jess oversees the editorial for all of Cosmo's efforts across print, digital, video, and emerging platforms.
This content is created and maintained by a third party, and imported onto this page to help users provide their email addresses. You may be able to find more information about this and similar content at piano.io
Advertisement - Continue Reading Below
More From Politics
Moving Forward: We Need Better, Not 'Normal'
Could This Be the Last Year of Roe v. Wade?
Advertisement - Continue Reading Below
Meet the Next Presidential Pets, Major and Champ
Who Is Jen Psaki, Biden's Press Secretary?
Bernie Sanders at the Inauguration Is a Whole Mood
The Inaugural Concert Was a Cheesy Balm
Read VP Kamala Harris's Inauguration Speech
No, There Is No Inaugural Ball This Year
Kamala Harris Is "Momala" to Two Stepchildren
Read Amanda Gorman's Moving Inauguration Poem