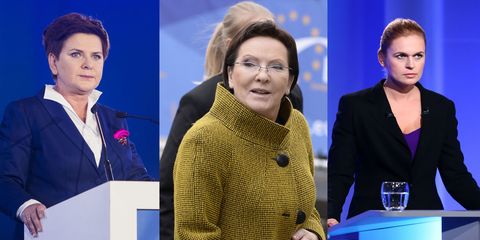 In Poland, women really do run the world.

Already, a woman serves as the country's prime minister, and on Sunday—when Poles hold a general election—she will defend her spot against two other women. So it's all but certain that a woman will be in charge of Poland come Monday. Which is awesome.

Interestingly, Poland is a pretty conservative country, deeply influenced by its Catholic roots. Abortion is illegal in most circumstances, and gay citizens have little protection under the law, according to Slate. There's no legal recognition of same-same partnerships, and same-sex couples aren't allowed to adopt.

And yet, as the Associated Press notes, women in Poland are on the whole better educated than men, hold down jobs, and support their families. One of the nation's first prime ministers after emerging from the Iron Curtain of communism was a woman, Hanna Suchocka.

And this is where it gets interesting: The AP also points out that women might be political pawns for the men in their political parties. "The party chiefs know that many voters are against them and that they cannot win," political analyst Kazimierz Kik said. "They know that women have softer manners and will not threaten their position as leaders, and put them forward."

But many voters are less cynical. "We are sick of men politicians," a 54-year-old woman told the AP. "We have heard and seen enough of them."

So who are these women vying to lead Poland, which has consistently been one of America's closest allies? Here's a look:

Ewa Kopacz, 58, is the current prime minister and hails from the Civic Platform party. She took the reins in 2014, when then party leader and prime minister Donald Tusk became president of the European Union.

Kopacz is a pediatrician by trade and served for years as Poland's health minister. She stirred up controversy in this role when she helped a 14-year-old rape victim find a hospital that would perform an abortion.

Kopacz's party—which has been in power since 2008—is considered center right and is actually pretty conservative when it comes to social issues. Civic Platform opposes gay marriage and abortion. In terms of the economy, the party has steered Poland away from its communist roots and towards the free market, according to Fox News.

It shares the same views on social issues as Civic Platform, but has taken a harder stance on immigrants as well as gay rights. (A Polish mayor who was part of the Law and Justice party once compared homosexuality to pedophilia, bestiality, and necrophilia.)

In terms of the economy, the party differs from Civic Platform because it wants the the government to play a more direct role.

Szydlo is an ethnologist—the study and comparison of different groups of people—and is a relative newcomer to politics, according to the AP.

Barbara Nowacka, 40, is a computer specialist leading a group of left-wing parties.

While not considered a serious contender for prime minister, opinion polls have shown that these parties have a chance of securing enough votes to at least enter parliament. Under male leadership, these smaller parties had far lower favorability.

Michael Sebastian Michael Sebastian was named editor-in-chief of Esquire in June 2019 where he oversees print and digital content, strategy and operations.
This content is created and maintained by a third party, and imported onto this page to help users provide their email addresses. You may be able to find more information about this and similar content at piano.io
Advertisement - Continue Reading Below
More From Politics
Moving Forward: We Need Better, Not 'Normal'
Could This Be the Last Year of Roe v. Wade?
Advertisement - Continue Reading Below
Meet the Next Presidential Pets, Major and Champ
Who Is Jen Psaki, Biden's Press Secretary?
Bernie Sanders at the Inauguration Is a Whole Mood
The Inaugural Concert Was a Cheesy Balm
Read VP Kamala Harris's Inauguration Speech
No, There Is No Inaugural Ball This Year
Kamala Harris Is "Momala" to Two Stepchildren
Read Amanda Gorman's Moving Inauguration Poem