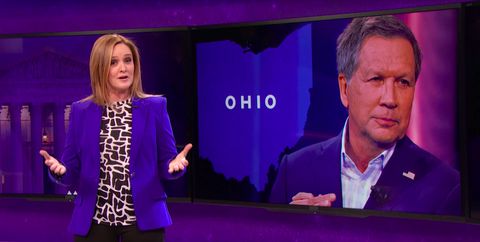 Republican presidential candidate John Kasich has made a name for himself in the campaign by seeming like a nice guy who's not as extreme as Donald Trump or Ted Cruz. But just because he's not as brash as his competition doesn't make the Ohio governor a moderate. Not by a long shot.

On Full Frontal, host Samantha Bee took a moment to examine Kasich's actual policy record. And if you were hoping he'd be pretty chill about gay rights and women's rights, there's bad news: He's not. "Kasich pours on the Midwestern charm thicker than cream of mushroom soup on a casserole," Bee jokes, but that doesn't mean he's toward the middle politically.

Even though he said he's attended a same-sex wedding, he refused to accept an out-of-state gay marriage in Ohio, even though one person involved was terminally ill. That case made it all the way to the Supreme Court; that case, which originated as Obergefell v. Kasich, became Obergefell v. Hodges and ended up legalizing same-sex marriage across the country.

And he's just as far to the right as any other Republican candidate when it comes to abortion rights. He just signed a bill to defund Planned Parenthood in Ohio, but usually "hides" his anti-abortion advocacy through budget bills. And remember just yesterday, when he praised the women who "left their kitchens" to campaign for him? Yikes. Just when you thought he was different from all the other guys out there.

This content is created and maintained by a third party, and imported onto this page to help users provide their email addresses. You may be able to find more information about this and similar content at piano.io
Advertisement - Continue Reading Below
More From Politics
Jot Down These 2020 Voter Registration Deadlines
In Honor of RBG, Nine Women Reflect on Her Legacy
Advertisement - Continue Reading Below
What I Learned Working on Garland's Confirmation
Where Senators Stand on Replacing RBG in 2020
Ruth Bader Ginsburg's Most Iconic Quotes
RBG's Deathbed Wish Was a Message for Trump
Can a SCOTUS Justice Be Replaced in 2020?
The World Reacts to Ruth Bader Ginsburg's Death
Ruth Bader Ginsburg—Woman, Justice, Icon—Has Died
How to Make an Impact in the 2020 Election