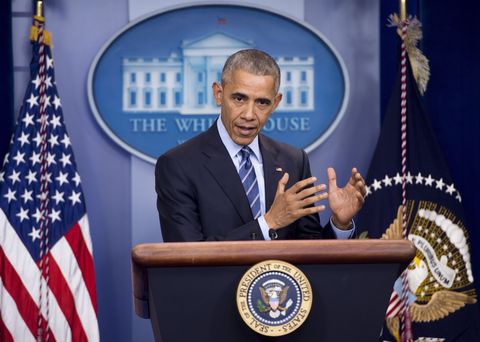 President Barack Obama on Friday warned against turning Russian hacking in the United States into a "political football" and said he hoped his successor, Republican Donald Trump, will take foreign influence in American elections seriously once he takes office.

Obama said he has confronted Russian President Vladimir Putin about the hacking, telling him to "cut it out and there would be serious consequences if he didn't." However, he offered no new details about the extent of any U.S. response.

In his final news conference of the year, the president also chided the media for what he called its "obsession" with the flood of hacked Democratic emails that were made public during the campaign as a result of the Russian interference. However, he stopped short of blaming the hacking for Democrat Hillary Clinton's stunning loss to Trump.

U.S. intelligence assessments that Russia interfered in the election to benefit Trump have heightened the already tense relationship between Washington and Moscow. Obama blamed Russia anew for standing in the way of international efforts to stop the civil war in Syria, where government forces have beaten back rebels in their stronghold of Aleppo.

Obama defended his decision to oppose significant U.S. military action in Syria but acknowledged that he feels "responsible" for some of the suffering there. Still, he pinned the bulk of the blame on Russia, as well as Iran, for propping up Syrian President Bashar Assad.

"This blood and these atrocities are on their hands," he said as he addressed reporters from the White House briefing room shortly before leaving on his annual Christmas vacation to Hawaii.

The president is ending his eighth year in office with his own popularity on the rise, though Trump's election is expected to unwind many of Obama's policies. He's leaving his successor a stronger economy than he inherited, but also the intractable conflict in Syria and troubling issue of whether Russia was meddling in the U.S. election to back Trump.

U.S. intelligence agencies have concluded with "high confidence" that Russia interfered in the election on Trump's behalf. The president-elect has disputed that conclusion, setting up a potential confrontation with lawmakers in both parties.

The president rejected any notion that the dispute over the origin of the hacking was disrupting efforts to smoothly transfer power to Trump. Despite fiercely criticizing each other during the election, Obama and Trump have spoken multiple times since the campaign ended.

"He has listened," Obama said of Trump. "I can't say he will end up implementing. But the conversations themselves have been cordial."

Trump's election has upended the Democratic Party, which expected to not only win the White House but also carry the Senate. Instead, the party finds itself out of power on both ends of Pennsylvania Avenue.

In a moment of self-reflection, Obama acknowledged that he had not been able to transfer his own popularity and electoral success to other sin his party.

"It is not something that I've been able to transfer to candidates in midterms or build a sustaining organization around," Obama said. "That's something I would have liked to have done more of but it's kind of hard to do when you're dealing with a whole bunch of issues here in the White House."