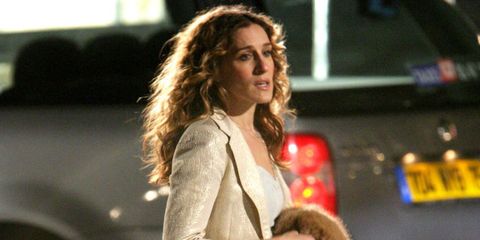 Carrie Bradshaw just got offered a chance to break into political journalism—well, kind of, anyway. On Thursday, Sarah Jessica Parker posted a meme to her Instagram of her Sex and the City character typing on her computer. The meme read: "I couldn't help but wonder...had the Russian ambassador been meeting with everybody except me?"

I had to. Don't know the provenance however whoever you are, thank you. X, sj

"I had to. Don't know the provenance however whoever you are, thank you," Parker captioned the image.

SJP's fans weren't the only ones who took notice of the political post. On Friday, Russian Foreign Ministry spokeswoman Mara Zakharova responded to the meme and offered Parker the chance to meet with Kislyak, The Hill reports.

"If #SarahJessicaParker desperately wants to meet Russian Ambassador to US -anything is possible. Sergey Ivanovich will be happy," Zakharova tweeted.

#Zakharova: If #SarahJessicaParker desperately wants to meet Russian Ambassador to US -anything is possible. Sergey Ivanovich will be happy pic.twitter.com/GhAmnuQBn5

Kayleigh Roberts Kayleigh Roberts is the weekend editor at Marie Claire, covering celebrity and entertainment news, from actual royals like Kate Middleton and Meghan Markle to Hollywood royalty, like Katie Holmes and Chrissy Teigen.
Advertisement - Continue Reading Below
More From Politics
Everything We Know About Senator Warren's Husband
Mayor Pete's Husband Would Be a "First Gentleman"
Advertisement - Continue Reading Below
How a Parkland Mom Turned Her Grief into Action
He Voted for Trump. She Voted for Bernie.
How Guerrilla Feminists Are Fighting Femicide
Who Was Mayor Pete's Father, Joseph Buttigieg?
Nancy Pelosi, Icon, Ripped Up Trump's SOTU Address
Thoughts From a First-Time Caucus-Goer
And Now, a Word From the Future Voters of Iowa
Ayanna Pressley Wants Total Justice for Survivors