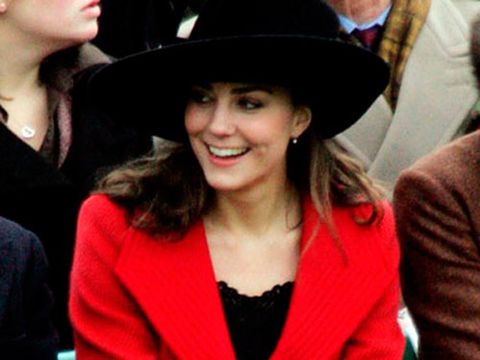 A pretty English girl walks down a London street, shielding her eyes from photographers hoping to snap her with her boyfriend, the prince. She is young and well-mannered and smiles politely as they pursue her, yet already her face is taking on a hunted look. Does this remind you of anyone? Behind every picture of Kate Middleton, Prince William's girlfriend, struggling through the press after a night out at a club or gazing determinedly downward as she heads to work, lies the ghostly image of Diana, hounded by paparazzi until the end. The movie The Queen probably would not have been a hit if love and lust in the House of Windsor weren't such a source of global titillation. And when the roman-ces go wrong, as in the case of Charles and Diana, they have the power to sway the course of the British monarchy.

Yet there are signs that if Kate one day becomes the Queen of England, she won't end up like her would-be mother-in-law. Asked about her good luck in dating Prince William, she gamely quipped, "He's lucky to be going out with me!" When Prince William revealed seven years ago that he intended to study the history of art at St. Andrews in Scotland, applications promptly rose dramatically, along with the hopes of mothers far and wide that their daughter might be the one to bring the heir to the throne home for tea. But Kate spoiled the fun: By her second year she was sharing a house with the prince and two friends, and when William paid £200 ($394) for a VIP seat at a university charity fashion show to see Kate modeling a black bandeau and bikini bottoms, the two became an item.

University was an idyllic time for the couple. Due to an unspoken agreement between the royal family and the British press, William and Kate got to play tennis, go to the supermarket, fetch a pizza, and enjoy low-key domestic contentment with no hassle from journalists or photographers. But by 2005, when the pair left the university cocoon for the world of work, interest in William's steady soared. She was snapped with William on a ski trip to Klosters, and soon there were regular sightings of the two partying in Ibiza or tumbling out of the West London nightclubs Boujis, Mamilanji, and Purple in the early hours. Soon enough, Kate was feeling the heat and complained through her lawyer about harassment from the media. In February 2006, it was announced that Prince Charles would provide her with a personal bodyguard, a retired officer from Scotland Yard. This decision only heaped fuel on the raging speculation that she and Prince William would soon be engaged. Then he stepped gallantly in. "Prince William is very unhappy at the paparazzi harassment of his girlfriend," said a statement from Clarence House, his London home. "What he wants more than anything is for it to stop." Memories of Diana hovering over the whole affair, several newspaper groups vowed not to use paparazzi shots of her. And they kept their promise-for a couple of months at least.

It helps that Kate comes from solid middle-class stock, promising a potential injection of fresh blood and perspective to the Windsor brand. Her parents, Michael, a former airline official, and Carole, a flight attendant, who raised Kate and her two younger siblings, Pippa and James, in a five-bedroom home in the quiet southern England town of Buckle-bury, made their money from Party Pieces, a popular mail-order company that provides doodads for children's birthdays. They sent Kate to the top-ranking boarding school, Marl-borough College-also the choice for Prince Andrew and Fergie's daughter Princess Eugenie-where she is remembered as calm and sensible, refusing to join the wilder girls in after-dark vodka binges. "She was the most kindhearted woman," Kate's hockey teammate Gemma William-son has recalled. "There were always cliques at school, but she would have time for absolutely everyone. That's what made her special." Another school friend, Jessica Hay, has been quoted saying, "Kate has class, stamina, and the mental strength to survive the limelight." As Diana did before her, Kate is already achieving style-icon status-the £40 ($79) dress from high-street chain Topshop that she wore on her 25th birthday sold out within 24 hours. Now she works with image consultant Leesa Whisker, who charges £400 ($790) a day as a personal shopper; Whisker was responsible for the stunning turquoise BCBG Max Azria dress Kate wore to a charity boxing event to support William's close friend Hugh van Cutsem. Currently, Kate works four days a week as assistant accessories buyer for Jigsaw-a separates chain similar to Ann Taylor that's owned by family friends John and Belle Robinson-while William trains as an army officer.

"Is Kate Middleton the new Diana? Thank goodness, no!" says Sebastian Shakespeare, a society journalist. "She's not aristocratic, and she's had a normal life. Don't forget, Diana had two children by the time she was Kate's age. Diana married at 20, when Charles was 32. Kate is the same age as William. Besides, I don't think a Kate-Wills wedding, if it happens, would be as much of a media event as it was 25 years ago. The only similarity between them is that the young Diana used to keep pictures of Prince Charles in her cubicle at West Heath School, just as Kate is said to have kept a picture of Prince William on her study wall at Marlborough College. Both of them were obviously attracted by the idea of a fairy-tale prince. Kate is a middle-class girl who got lucky."Perhaps-but it isn't a stretch to think of her as princess material. "She is modest, she is shyly elegant, and as she becomes more sophisticated and clued up about fashion, she will look more glamorous," says Geordie Greig, editor of Tatler. "She is the epitome of an effortlessly stylish English rose-she has qualities you can't create or manufacture. In many ways that makes her a Diana II, but the lessons of Diana have not been lost on her. You don't court the media, and you're tough when you need to be."

When asked by a reporter from The Sun about marriage a few years ago, William said, "I don't want to get married until I'm at least 28, or maybe 30." For the queen's part, with three of her four children divorced, she clearly doesn't want her grandchildren to rush into relationships. And yet Kate has been given permission to move her belongings into Clarence House, even though she still keeps a separate apartment in Chelsea.

"The press is having a feeding frenzy right now," says Greig. "The nation longs for a fairy-tale renewal of the royal narrative, and Kate Middleton carries the unconscious burden of that national expectation. Everyone wants a happy ending for the future king."

And the future queen? Would the occasional paparazzi-free outing be too much to ask?