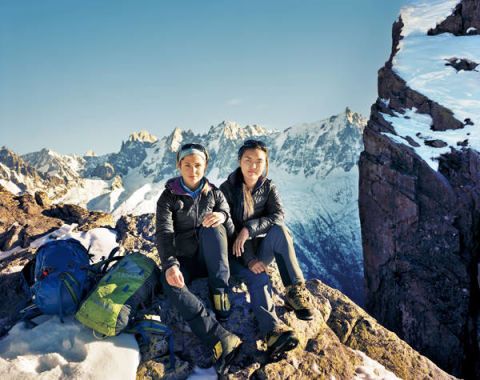 MELISSA ARNOT AND Pasang Lhamu Sherpa are two professional female mountain climbers in a male-dominated industry—but until last year, they had never met. "We've known about each other for a long time," says Arnot, 30, a petite blonde from Idaho who holds the record for Everest summits by a non-Sherpa woman (five). Pasang Lhamu, 29, who has summited Everest once and is one of a handful of Sherpa women trained as a guide and sponsored as an athlete, even searched for Arnot on Facebook. Then, in August, they ran into each other on Mount Rainier.

"I walked by her and yelled, 'Pasang! I want to climb something with you!'" Arnot recalls. This month, they'll do just that when they try to set a world record by summiting Everest twice in one season—sans support staff—from the Nepalese Southeast Ridge and then the Chinese Northeast Ridge. It's a feat accomplished only once before, last May, by climber David Liaño Gonzalez.

"The message is: If women support each other, everything will be possible," says Pasang Lhamu. Both lament the sexism they've found in mountaineering: being passed up for expeditions because leaders or clients don't trust their strength, or asked along for reasons other than their competence. (Arnot, also a guide, bemoans male clients who addressed her only as "hotcakes" and "sweet cheeks.") "One of the first questions always is, 'Does your husband go with you?'" says Arnot, who is married to the director of a nonprofit. "I respond, 'Does your wife come to your job?' I'm climbing Everest—I'm not playing children's soccer." In Sherpa culture, where enough men work as guides and porters that the ethnicity is synonymous with the profession, the stigma against female climbers is especially strong. "You should get married and have a child," explains Pasang Lhamu, whose husband, a physical therapist, is supportive of her career. "Stay home and people will treat you well."

Arnot and Pasang Lhamu hope their alliance will also buoy a troubled climbing community. In April, three European climbers ascending Everest angered a group of Sherpa men out setting ropes. Back in camp, the Sherpas threw rocks and punches, and the Europeans fled, raising concerns about relations between the Westerners and Easterners who make a living on Everest. Arnot, who was there, acted as a peacemaker. (Simone Moro, one of the Europeans, credited her in interviews with saving his life.)

A media maelstrom ensued, and Arnot was left unsettled. "I want to do this climb with Pasang to say, 'Hey, while all you boys are speculating over who's in the right, Pasang is a Sherpa, and I'm a Westerner, and we're partnering up. We don't have to show you with our mouths. We can show you with our feet.'"