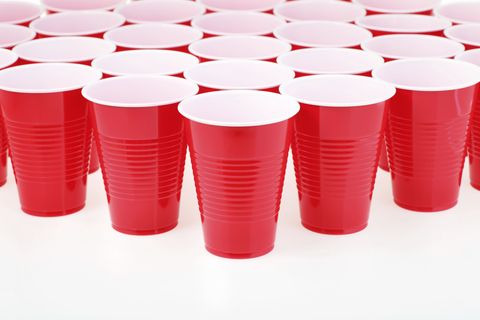 In college, my girlfriends and I had a secret code to ward off unwelcome attention from men at parties. If one of us was being pestered by a drunk dude she wasn't into, she was to "throw up the X," meaning make an X-shaped signal with her arms in the air and a member of our friend group would come pull the girl away from the guy they couldn't seem to shake on their own. I didn't know it at the time, but it turns out, my friends and I were practicing a form of bystander intervention.

Last Friday, The New York Timeswrote about the rise of bystander education programs at colleges around the country, designed to teach students how to intervene if they see something that doesn't look or feel right as a way to prevent and reduce sexual assault on campus. Some of the diversions mentioned in the Times piece include turning on the lights, turning down the music, spilling a drink on a guy who's being too aggressive, or forming a conga line to pull him away from the woman he's bothering and onto the dance floor. "The goal is to stop bad behavior before it crosses the line from drunken partying to sexual assault," Michael Winerip writes.

Programs like this are ideal for colleges where sexual assault is much more likely to be committed by an acquaintance at a party than it is by a stranger in an alley. By teaching students to recognize the signs of potential assaults in the making, they'll be more likely to intervene in situations where the girl might not be saying no because she's too drunk to say anything at all. Because, as a source in the Times story notes, "not saying no is not the same as a woman saying yes."

Sadly, Wall Street Journal columnist James Taranto used the Times story as a peg to spout horrible, misguided claims about the nature of sexual assault at college by arguing that a rape victim is equally to blame for an assault if both she and the rapist are drunk. "If two drunk drivers are in a collision, one doesn't determine fault on the basis of demographic details such as each driver's sex," he writes. "But when two drunken college students "collide," the male one is almost always presumed to be at fault. His diminished capacity owing to alcohol is not a mitigating factor, but her diminished capacity is an aggravating factor for him." (There's a Change.org petition to have Taranto fired.)

That's victim blaming 101. As Think Progress notes, "The pervasive notion that it's women's responsibility to avoid rape—and that they can effectively avoid becoming victimized if they dress differently, or drink less alcohol—has a huge impact on the way that survivors are treated if they decide to come forward about a sexual assault. Rather than receiving compassion and support, rape victims are typically greeted with suspicion and shame. They're either told that the crime was their own fault because they should have been smarter, or they're assumed to be lying."

As Marie Claire reported in "Big Shame on Campus," that line of thinking often results in reported rapes on college campus being treated like drunk mistakes rather than as serious crimes. "People think [a sexual assault] probably involved alcohol and that there was a lack of clear communication about consent," David Lisak, Ph.D., a forensic consultant who has studied rape and sexual assault since the 1980s, told Marie Claire. "Those kinds of assaults do occur, but they're a small minority." In fact, Lisak's research shows almost two-thirds of college rapists rape more than once, and repeat rapists account for 9 out of every 10 rapes on college campuses. It shouldn't need to be said, but: rape is not a drunken mistake nor is it the result of drunken college students "colliding"; rape is rape.

You hear that, Taranto?

Kayla Webley Adler Deputy Editor Kayla Webley Adler is the Deputy Editor of ELLE magazine.
This content is created and maintained by a third party, and imported onto this page to help users provide their email addresses. You may be able to find more information about this and similar content at piano.io
Advertisement - Continue Reading Below
More From Politics
How to Help Black Lives Matter If You Can't Donate
Does Your State Have a Tampon Tax?
Advertisement - Continue Reading Below
What's Ranked-Choice Voting? Allow Us to Explain
Paid Leave for All Isn't Just a 'Women's Issue'
Yes, Caregiving Is Essential Infrastructure
Unforgettable Signs From the Protests
23 Ways Women Still Aren't Equal to Men
Ma’Khia Bryant: What We Know
Greta Thunberg Expertly Trolled Boris Johnson
The Hope and Heartbreak of Derek Chauvin's Verdict