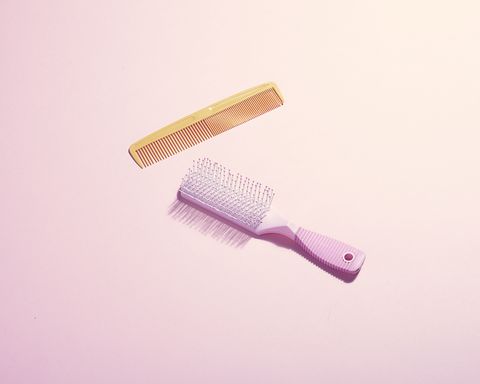 In high school, I predictably coveted the shiny, straight brown hair with the reddish sheen of the cool cheerleader a year ahead of me. By contrast, my darker hair was thick and poufy and frizzy—especially in the summer. It felt so heavy on my neck that I almost always wrestled it into a ponytail or a braid. I tried to get it thinned out, but even that wouldn't tame it.

Even more annoyingly, it turned gray prematurely. I might have let it go except for the friend who said I was too young to look so old.

"My hair fell out and grew back so many times that I lost count."

I succumbed to coloring. After a while, if I didn't color it every three weeks or four weeks, a strip of white grew in at my part and made me look just like a skunk. At one point, when I was dating a six-foot-six-inch man, I felt like he was looking right down at that line.

Some years later, I was diagnosed with acute myeloid leukemia at the age of 48—and with the chemotherapy I underwent as treatment, I lost all my hair. I was sorry then that I hadn't appreciated it more. I wanted my old self back, and when I pictured her, she was jogging with a ponytail waving in the breeze.

Bone marrow transplantation, also referred to as stem cell transplantation, is a procedure that replaces unhealthy blood-forming cells with healthy ones. It allows doctors to give large doses of chemotherapy or radiation to increase the chance of eliminating blood cancer and then to restore normal blood cell production with cells either harvested from a donor or directly from the patient.

Consequently, my hair fell out and grew back so many times that I lost count.

But I learned that hair often grows back differently after chemotherapy: curly can become straight, thick can become thin, dark can become light, or vice versa. It's not clear why this happens, except that in attacking rapidly dividing cancer cells, chemotherapy can't tell the difference between the bad guys and hair follicles, which also grow rapidly. This is why hair falls out—and afterwards, may come back looking like it belongs to someone else.

The first time I welcomed a new crop of fuzzy hair, I couldn't wait for it to get long enough to cut. Going to the hairdresser became a novelty—it seemed like such a normal thing to do.

For a time, I actually had fun being nearly bald. People said I looked like Sinéad O'Connor and bought me dangly earrings to complete the part. After recovering from days when I was too sick to get out of bed, I was a rock star! But then my hair sprung into tight gray curls and I was an old woman. Or maybe a French poodle.

But my hair was the least of my worries at the time of my last relapse in December 2007. I was afraid I had come to the end of the road. None of my three children were near to being married, but when my sister drove me to the hospital one dark night, I slipped down in my seat and said, "I'm never going to see my grandchildren."

I got another chance. My doctor gave me a stronger chemotherapy drug and found a new donor from the national bone marrow donor registry.

"It is thinner and straighter—the kind of hair I always wanted."

I went into remission and received my new donor's cells intravenously. But then my body rebelled. I had several life-threatening infections and went into kidney failure, with my legs swelling up like tree trunks. I didn't emerge from the hospital for nearly four months.

That was seven years ago.

My donor, Denise, returned my life to me and made it possible for me to meet the granddaughter I thought I would never see. And I also got a consolation prize: darker hair. I haven't colored it once.

It's thinner and straighter, too—the kind I've always wanted. And it's long again so I can put it in a ponytail when I run or play tennis.

I wish I hadn't gone through all this to get it. But I'm alive and well and grateful for every minute—and for every strand of hair.

This content is created and maintained by a third party, and imported onto this page to help users provide their email addresses. You may be able to find more information about this and similar content at piano.io
Advertisement - Continue Reading Below
More From Beauty
The Best Supplements for Glowing Skin
Hair Dryer Brushes Will Change Your Blowout Game
Advertisement - Continue Reading Below
A Dermatologist's Guide to Ferulic Acid
Editor's Pick: Our Favorite Hand Soaps
Soothe Your Dry Palms with These Luxe Hand Creams
Sephora Collection Just Launched a New Foundation
Keratin Treatments You Can Do At Home
How Marie Kondo Does Self-Care
Kick Off 2021 With A New Fragrance
Layered Haircuts For Every Face Shape