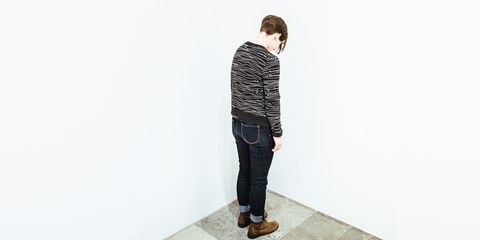 At the tender age of 26, I got what I'd always thought was my dream job. I left my home state of Alabama for the first time to work for a company that meant the world to me in an exciting new city. A year later, they fired me. Here are some things I learned along the way.

My dream job was my dream job because amazing people worked there. They did everything I wished I could do. They cranked out crisp, funny, conversational prose.  They wrote well-researched, important books. They spoke eloquently on important topics at events and on live TV.

I used to see people doing things I couldn't do and chalk it up to their superior intelligence or attractiveness.

Ability is a funny thing.

The more time I spend around incredibly talented people, the more I realized that innate talent and attractiveness are a tiny, tiny percentage of ability. You gain the ability to do things others see as great by busting your ass doing things at the edge of your current level of ability.

2. Quitting before you quit is a big deal.

I don't blame my boss for firing me. In fact, I feel terrible for continuing to take a whole paycheck for doing half of the job I was hired to do.

I realize now that I was actually stealing from them. Looking back, I expected someone to notice I wasn't performing, and to help me find a way to contribute.

But guess what? Figuring out how to add value to a company isn't anyone's job but your own.

Thankfully, after a good cry, the stomach-tearing stress I'd carried for months lifted. I felt free to mentally prepare for just one future instead of trying to hold on to my job and prepare for my next move at the same time, doing neither well.

That people aren't willing to try and fail is your greatest weapon.

5. There is a formula for success.

But it isn't guaranteed.

In Alcoholics Anonymous, they say of sobriety: "It's simple, but it's not easy." The success formula is very simple. Experiment, measure, evaluate.

Measure: Gather your results. Examine them.

Use what you learned to inform your next experiment.

6. Risk is necessary for reward.

Nothing about this is easy. Some people spend their entire lives deciding which problem to solve. But here's a trick: You'll get the biggest results, and with them the most learning, by choosing the hairiest problems and running the biggest, riskiest, most interesting experiments.

Every time I'd screw up at work, it was grist for the mill of my anxiety that I didn't deserve to be there.

Now I see my screwups for what they are: Experiments where my thesis was not confirmed. Mistakes don't mean I'm incompetent or untalented. They mean I'm running experiments to learn, not prove to myself how smart I am.

If you know the results of the experiment, you don't need to run it. If all your risks pan out, you're not trying hard enough. You're not operating at the edge of your ability. That is, as it turns out, is far worse than trying and failing.

That people aren't willing to try and fail is your greatest weapon. Someone willing to take a leap will always move farther from where they started than the person who takes small, ginger steps forward.

And if that—becoming a person who creates more value for themselves and others—ain't the entire meaning and purpose of work, I don't know what is.