In her new book Finding My Voice, out April 2, the Obama Foundation adviser takes readers on her journey from growing up in Chicago to being one of the Obamas' most trusted confidants in the White House. Here, she shares with Marie Claire some of the most formative experiences on her path to success.

Marie Claire: You lived in Iran until you were five. How did that shape your worldview?

How did that experience shape my view of the world? I am confident that when I walk into a room and I meet new people, regardless of their background, geography, race, religion, or gender identity, I can find something in common with them. We lived with other families from all over the world on a hospital compound. I learned how to speak French because I had a French playmate, and I learned Farsi because we were in Iran, and I learned English because my parents spoke English. Even with a language barrier, you can sit down with someone and find something in common.

My approach to foreign policy, for example, has a lot to do with those lessons. It’s important to not turn inwards. We have to appreciate our uniqueness, but also recognize there's a lot to learn outside of our own community here in the United States. Living in Iran was a very important experience for me and it has shaped me for the 50 some odd years that followed after I left.

MC: After graduating from Stanford and University of Michigan Law School, you worked in corporate law until 1987, then joined the office of the Chicago mayor. What inspired that move?

VJ: After college, I had a very specific plan. I kind of craved the rigidness of my plan rather than the inevitable zig-zags of life. I was looking for a straight line and the adventure is in the zig and the zag. It took me more than a minute to figure that out, and I became very miserable. Frankly, I'm glad I was so miserable because if I hadn't been, I may have stayed longer in mediocrity. That misery really motivated me to take a hard look at my life.

Too often young people are busy doing what they think is expected of them. My parents didn't say, ‘You have to be this’ or ‘You have to be that.’ They just wanted me to be really good at whatever I did. And yet it was instilled in my mind that they were proud that I was a lawyer, so I thought that should be what I want. I made the same mistake in my marriage. I married the boy next door, and I thought I could just will it to work. That's not how marriage works. I thought having a baby would help fix my marriage. Conventional wisdom tells you that never works, but I thought, Well this will work. Even though I had Laura for reasons I wouldn’t recommend, it changed my life completely. It was the best thing I've ever done.

I never in my wildest dreams thought I would be a single mom, but when my husband and I got divorced I knew I had to be strong for her. I wanted to make her proud. So shortly after my divorce I took a leap and left my law firm to work for Harold Washington, then the mayor of Chicago. Almost everybody I cared about told me not to go; they thought I was taking a step down in my career. But it was the first time I really listened to that quiet voice inside of me. I left my beautiful office on the 79th floor of the Sears Tower in Chicago and I walked into a cubicle at City Hall facing an alley. Yet I felt like it was exactly where I belonged. I was part of something bigger and more important than myself. It was both an adventure and terrifying.

MC: When she was 26, Michelle Obama interviewed with you to join the mayor’s office. She wouldn’t accept your job offer until you convinced her then-fiancé, Barack Obama, that she should take the job.

VJ: As surprising as it was for me to have to convince her fiancé, I realized they were trying to figure out the best path to make a big impact. Before he made the decision to run for the Senate and then again for president, Barack included her in the strategy sessions to figure out viability and what the personal sacrifices would be. At that dinner, it wasn’t that she was deferring to him. She valued his input. And he has done the same with her time and time again.

They felt like home to me. Barack and I clicked because of the time we had spent in faraway lands. At that first dinner, he was able to get me to open up and talk about living in Iran. It seemed completely similar to his background; he made me feel like he understood me in a way I hadn't felt before. With Michelle, we had similar parents who loved each other completely, believed in us, and appreciated the value of education. They sacrificed in different ways, but nonetheless did so so we could have the opportunities that we have. We shared this bond over the idea that for those who much is given, much is expected—and we both felt a need to give back.

After that first dinner, I will say I thought maybe, just maybe one day, [Barack Obama] could be mayor of Chicago. That was the pinnacle, in my mind.

It wasn’t that she was deferring to him. She valued his input.

MC: You’re now one of the Obama family’s closest confidants; you were a senior adviser in the Obama Administration. How did that relationship allow you to flag sensitive issues?

VJ: One of the advantages of having had a longstanding friendship with both of the Obamas was that they knew I had no agenda. I was only there to be helpful, so it made it easier for me to raise sensitive issues than perhaps for others. When I noticed that senior women were not speaking up as much as they could in 2009, I began to worry. So as I spoke with [some senior women] what was clear was that the culture was having a siphoning effect on them. They weren't as comfortable speaking up as they should have been given the incredible talent and intellect that they brought to the table.

I said to Barack, ‘Take a look at the meetings you’re in and you’ll notice what I notice.’ And he did. He said, ‘Let’s invite about 15 senior women over for dinner, and we’re going to talk about it.’ So I went and I spoke to each woman individually. I said, ‘Look, the President is going to invite us to dinner. You have to be honest with him. You have to tell him what you really think.’ When people are in positions of power, people around them shy away from telling them things they think they might not want to hear. So an advantage I had was having no problem telling him things I didn't think he wanted to hear.

At the dinner, he listened to them, then asked them to speak up. It was what their job required, and he valued their perspective. And it worked. The culture changed.

MC: Fast forward to today. You’ve joked you’re still not at the stage of acceptance with Donald Trump as president. As a civilian, how do you view the polarized political world and what do you see as the way forward?

I'm thrilled that the third-in-line for succession for the President is once again a woman—a woman who knows how to get things done.

VJ: This has been an ongoing conversation with my mother and with me. My biggest frustration with the 2016 election was that 43 percent of eligible voters didn't vote. That’s why I worked so hard with Michelle Obama on When We All Vote, a non-partisan initiative trying to get people to appreciate the most basic responsibility of citizenship: to vote. We want them to feel empowered, like their vote matters and can make a difference.

My mom views our democracy as fragile. She probably feels it's more fragile than I do because of all of the tough things that did happen through the course of her life where society didn't protect her. She appreciates it's not just the laws, but the social norms as well. If you start to erode away at those social norms, then you can have devastating consequences.

That said, I have seen the students from Parkland travel the country last summer encouraging people to vote. I have seen all of the marches where people have come forward and have cared about issues that weren't even their own issues. These are ordinary people doing extraordinary things. They are all fighting for our democracy. That helps me feel more confident that better days are ahead.

MC: Who gets you excited about the future of politics?

VJ: Beto O’Rourke, Stacey Abrams, and Andrew Gillum. I say that not just because of how they conducted themselves during their campaigns, but also because of how they have behaved after their losses. They are resilient, they're bouncing back, and they're all still committed to public service. So I think that's the future.

I'm also excited about the number of women and people of color who are in this new Congress. It’s historic! When I was in Washington, I always thought that if we had more women in Congress, regardless of party, it would have sparked more progress. Diversity is a strength.

I am also really thrilled that the third-in-line for succession for the President is once again a woman—a woman who knows how to get things done, is fearless and understands the art of compromise, and who is tenacious and will really hold people accountable. Our democracy works when we're all holding one another accountable. And I think we are at that inflection point right now.

This interview has been edited for clarity and length. An abbreviated version of this interview appears in the April 2019 issue Marie Claire. 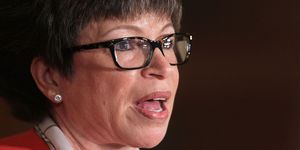 Valerie Jarrett on Scary Gun Loopholes
This content is created and maintained by a third party, and imported onto this page to help users provide their email addresses. You may be able to find more information about this and similar content at piano.io
Advertisement - Continue Reading Below
More From Money & Career
The Sacred Boom
How to Afford Your Post-Pandemic Getaway
Advertisement - Continue Reading Below
Katrina Lake Is Still a Boss
So You Want a Postnup
Renee Montgomery on Becoming Co-Owner of the Dream
5 Financial Lessons the Pandemic Taught Us
Yes, You Can Afford to Live Alone. Here's How
When WFH Becomes a Never-Ending Nightmare
How to Nail a Zoom Interview
VP Harris Chats With NASA Astronauts—in Space