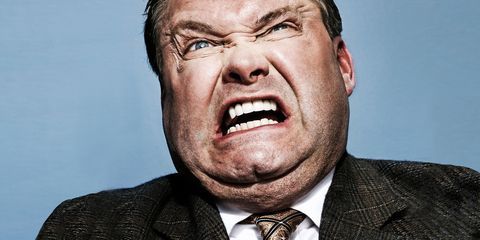 At my last job, I spent every single day afraid of walking in to the office. I still feel sick just thinking about it. In fact, I debated writing this story at all for fear of what my scary, manipulative, maniacal bosses would do to me for speaking out.

Have you ever heard of those Craiglist scam jobs? Where someone posts a serious-sounding, white-collar job listing, promising a ton of money for minimal work, which typically ends up being at some really shady business? It happens—and I fell for it.

When I first moved to New York at age 23, I got a job as a "marketing director" at a company that owned several websites. The bosses were brothers, and one of them was a lawyer, which turned out to be an important detail because his education helped them get around a lot of legal wrongdoing.

The tiny Manhattan office was cramped with Craiglist hires, most of whom were traditionally pretty young women with good manners, all of whom were getting paid far less than their job titles and descriptions suggested. My computer sat atop a case of VitaminWater for a chunk of my tenure. The staff was universally entry-level, which was key. They needed people working for them who were too naive to recognize their shady business practices, too inexperienced to risk losing their job title, and too humble to reject the abysmal pay. Every person who worked there, including me, was from someplace else in the U.S. None of us had the skepticism that born-and-raised New Yorkers are lucky to have...and that's why they wanted us.

There was a rule that no employees could answer the door. Why? I didn't realize it at the time, but it's because they were constantly on the verge of getting served. And the brothers gleefully sued anyone who crossed them. They weren't simply entrepreneurs who became litigious when necessary to protect their company—they were eager to take anyone to court, anyone at all, as a power play. Employees had to sign non-compete agreements that basically promised we would never have a job outside their company—ever. We were trapped.

At one point, they hired a "public relations manager" to write and publish fake press releases about made-up philanthropic donations. Yes, they invented charities and donations. It was an effort to spruce up their public image and SEO results after a lawsuit with a writer landed them some bad press.

But it wasn't just legal drama we lived in fear of...it was also catering to their unpredictable and sometimes silly whims. One time, the company hosted a birthday party for the brothers' miniature dog, and we were all asked to stay after work that evening, without pay, to celebrate. There was dog cake and a pile of dog gifts and a passionate discussion between the two brothers about which dog dress she should wear for the event. There was no food for the employees, but they asked me to order a $32 steak from a high-end restaurant for the pooch.

My bosses were annoying individually, but as a duo, they were a menace dead-set on ruining anyone in their way. They even bragged to me about several instances wherein clients were rightfully owed refunds—that they never forked over.

The brothers eventually sold their company, though, surprise surprise, the buyer sued them for fraud because they were dishonest about the company's assets. It's been six years since I wrote an affidavit for that lawsuit and I still recoil at the thought of their legal wrath.

In fact, when I google the name of the writer who published the bad press I mentioned earlier, a smear article appears in which my bosses make her out to be clinically insane. They'll probably try to do the same thing to me if they ever figure out that I wrote this.

I escaped the company legally unscathed but emotionally exhausted. On the bright side, I earned some of that New York skepticism, which has served me well. I hate that they're duping people to this day, but knowing that these two lying hacks are making millions inspired me to at least make an honest go of it as a self-employed writer. I set my own terms in my career now, and it turns out I'm a pretty great boss.