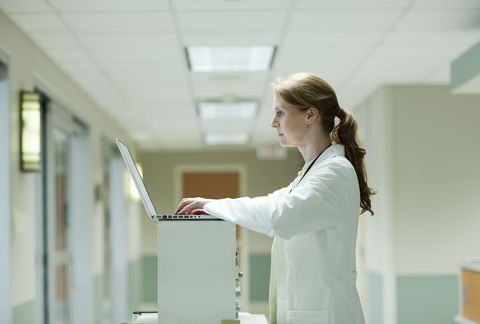 The fact that women make less than men is old news, but that doesn't mean we shouldn't talk about it all the effing time. How else is anything going to change, right? And as depressing as it is that Jennifer Lawrence made less than her male costars on American Hustle, you know what's even worse? The fact that female physicians at the nation's most highly acclaimed public medical schools are on average earning nearly $20k less per year than their male peers.

Of course, every specialty is blessed with its own wage gap, so here's the exact breakdown from JAMA Internal Medicine's recently-published analysis:

2. Female orthopedic surgeons make around $41,000 less than their male coworkers.

3. Female oncologists and blood specialists make about $38,000 less than their male coworkers.

5. Female cardiologists make around $34,000 less than their male coworkers.

Just, augh. But there is one piece of (very small) good news: female radiologists appear to be making about $2k more than their male colleagues...so...yay?

"Fixing the pay gap between male and female physicians in academic medicine requires more than just studies showing that it exists; concerted efforts are needed to understand and eliminate the gap," Dr. Vineet M. Arora writes in an op-ed published with the study. "Fixing the gap will also require the courage and leadership of women academic physicians—the 'Dr Lilly Ledbetters' out there—to advocate to eliminate it. It is time that the 'woman card' be worth the same amount as the 'man card.'"

Co-signing this so hard.

This content is created and maintained by a third party, and imported onto this page to help users provide their email addresses. You may be able to find more information about this and similar content at piano.io
Advertisement - Continue Reading Below
More From Money & Career
"I Was Afraid to Be Associated With My Brand"

Arianna Huffington's Five Steps to Beat Burnout
Advertisement - Continue Reading Below
The Budget: Buying a Car
Created for From Marie Claire for Created by Marie Claire for
Capital One
Will Women Be the First People on Mars?
Sallie Krawcheck Schools Us in Investing 101
Dara Treseder Is Why You're Obsessed With Peloton
Talking With the Author of This Summer's Must-Read
The Sacred Boom
How to Afford Your Post-Pandemic Getaway
Katrina Lake Is Still a Boss