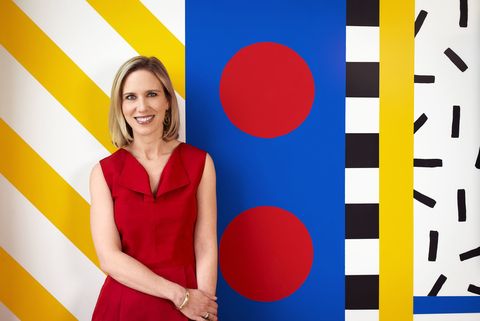 A few weeks into her new job as Instagram's chief operating officer, Marne Levine stopped by a pop-up coffee shop on parent company Facebook's campus. She ordered a latte, served with a frothy heart.

I'm at Instagram now; I should photograph this, Levine thought. That's what the picture-sharing site is all about, right? Latte art, hot-dog legs, and acai bowls. She added a filter, pressed "share," and waited for an overwhelming response from her thousands of followers (which didn't come). And then, she felt like a fraud.

"I love coffee, but I don't photograph it. That's not who I am," says Levine, 46. Her Insta-fail quickly taught her that authenticity is key. "I'm a social creature, so my subject should not be the coffee. It's about being together with friends," she explains (Instagram cofounder and CEO Kevin Systrom, who, Levine says, loves the art and science of coffee, can totally pull off latte-art pictures).

Levine at Instagram's #CreativeCollisions event in Melbourne, 2016
Courtesy of Levine

We're chatting at Instagram's new headquarters within Facebook's sprawling grounds in Menlo Park, California. It feels like a 3-D version of the app: mid-century modern decor, pale wooden paneling, and blown-up photos (taken by users, of course) splashing the walls with color. Levine, in head-to-toe black, rocks a dramatic asymmetrical skirt ruched on one side—a sartorial anomaly in a sea of jeans and T-shirts. "The skirt is by Staci Snider, an emerging designer based in New York City," raves Levine. "She's a great example of a female entrepreneur on Instagram (@stacisnider)."

Her enthusiasm about the platform and its technicolor community is palpable—perhaps because it's a dramatic change from her previous life working in government. Before joining Instagram as the company's first COO in late 2014, Levine spent over a decade in various policy-related roles. She now works alongside Systrom to scale the Instagram community (which has more than 600 million monthly users) globally. And under the mentorship of longtime friend Sheryl Sandberg, Facebook's COO, Levine is fast becoming one of the most powerful women in Silicon Valley.

Before joining Instagram as the company's first COO in late 2014, Levine spent over a decade in various policy-related roles.

Her desk is on the top floor (the third), where all the conference rooms have names linked to Instagram's history. There's "Dogpatch" and "South Park," both San Francisco office locations before the app was acquired by Facebook in 2012 after launching two years earlier. Levine's favorite meeting space is "#NoFilter." "I'm super-direct," she says. "I don't want people to come in here and choose their words carefully; I want to have real conversations."

That wasn't always the case. After graduating from Ohio's Miami University with a degree in political science and speech communication in 1992, Levine worked at the Treasury Department under famed economist Larry Summers. She first met Sandberg there, and like her, Levine was one of Summers' protégées—so much so that she followed him to Harvard when he became the university's president in 2001. She was his chief of staff, then became a full-time student at Harvard Business School in 2003. Levine often channeled Summers' views rather than her own. "My professor asked me a question, and I said what Larry Summers would think," she recalls. Most Harvard staffers knew about her working history with Summers. "He said, 'That's great Larry Summers thinks that. What do you think?' That was the first moment I realized maybe I'd lost part of myself."

Still, she continued to work for Summers after HBS, returning to a chief of staff role when he joined the Obama administration as director of the National Economic Council in 2009. Then she got a call from Sandberg in late 2010 asking if she would be interested in heading up public policy at Facebook. "I said no," Levine says. "I was in my dream job. Working on policy at the White House is about as good as it gets."

But her husband, renewable-energy investor Phil Deutch, had a different take. "'You're being a lazy thinker,' he said. He told me I wasn't being imaginative about what it could mean to do policy for a company like Facebook," Levine says. "It was a much-needed jolt."

Interviewing at Facebook, even if you count its famous COO as a friend, is grueling. Levine says she had an entire day of interviews with seven key team members, culminating in dinner with Mark Zuckerberg. She can only share so much about their meal, thanks to Facebook's propensity toward NDAs, but says Zuckerberg was "very curious and he goes deep fast."

She accepted an offer to become Facebook's vice president of global public policy days later. "I felt Facebook had a lot of what I appreciated about government—being around a collection of really bright, thoughtful people motivated to have a positive impact," she explains. Plus, the social network's culture encouraged her to find, and hone, her own voice: "The Facebook way is that you sit at the table and you state your opinion, back it up with data, and make a recommendation."

"Over the past two years, Levine has helped double the app's user base through rapid international expansion."

Levine loved lobbying for the company in Washington, D.C., on issues such as privacy, content policy, and implementing disaster-response tools like Safety Check. But after four years in the role, she was ready for a fresh challenge—something she blurted out to her boss, vice president of communications and public policy Elliot Schrage, during a performance review in 2014. So when the Instagram role came up, Schrage put her name forward into a fiercely competitive pool of candidates.

Her first six months at Instagram were "not fun," she says: Her mother had just died, and Levine commuted across the country every week, leaving her husband and two sons in D.C. (they moved to San Francisco in August 2015). But Sandberg advised her to focus on making an impactful entry, so she knuckled down and concentrated on work. She also used her rookie status at Instagram to ask lots of questions. "You are unburdened by the way things have always been done, so you can see things that others miss," she says.

Over the past two years, Levine has helped double the app's user base through rapid international expansion (Instagram has employees in eight locations outside the U.S., including Singapore and Tokyo). She oversees the advertising platform—think sponsored posts—that's predicted to generate nearly $3 billion by the end of 2017 and championed the team's 2016 foray into live video.

"Women are drawn to Instagram because it's a storytelling platform, and women have always been incredible storytellers."

Levine credits a swarm of enterprising women, from furniture and fashion designers to makeup artists and chefs, with fueling the app's growth. "Women are drawn to Instagram because it's a storytelling platform, and women have always been incredible storytellers," she says. Levine regularly travels around the globe—often in countries where women entrepreneurs have historically faced growth barriers—to meet with female business founders. Their loyalty to Instagram, as well as their enthusiasm, drives engagement, helping to increase advertiser interest. And the platform's power to help women start businesses through their mobile devices energizes Levine. "[Women] can access the information, support, markets, and even the capital to turn an idea into a business," she says. "That's remarkably empowering."